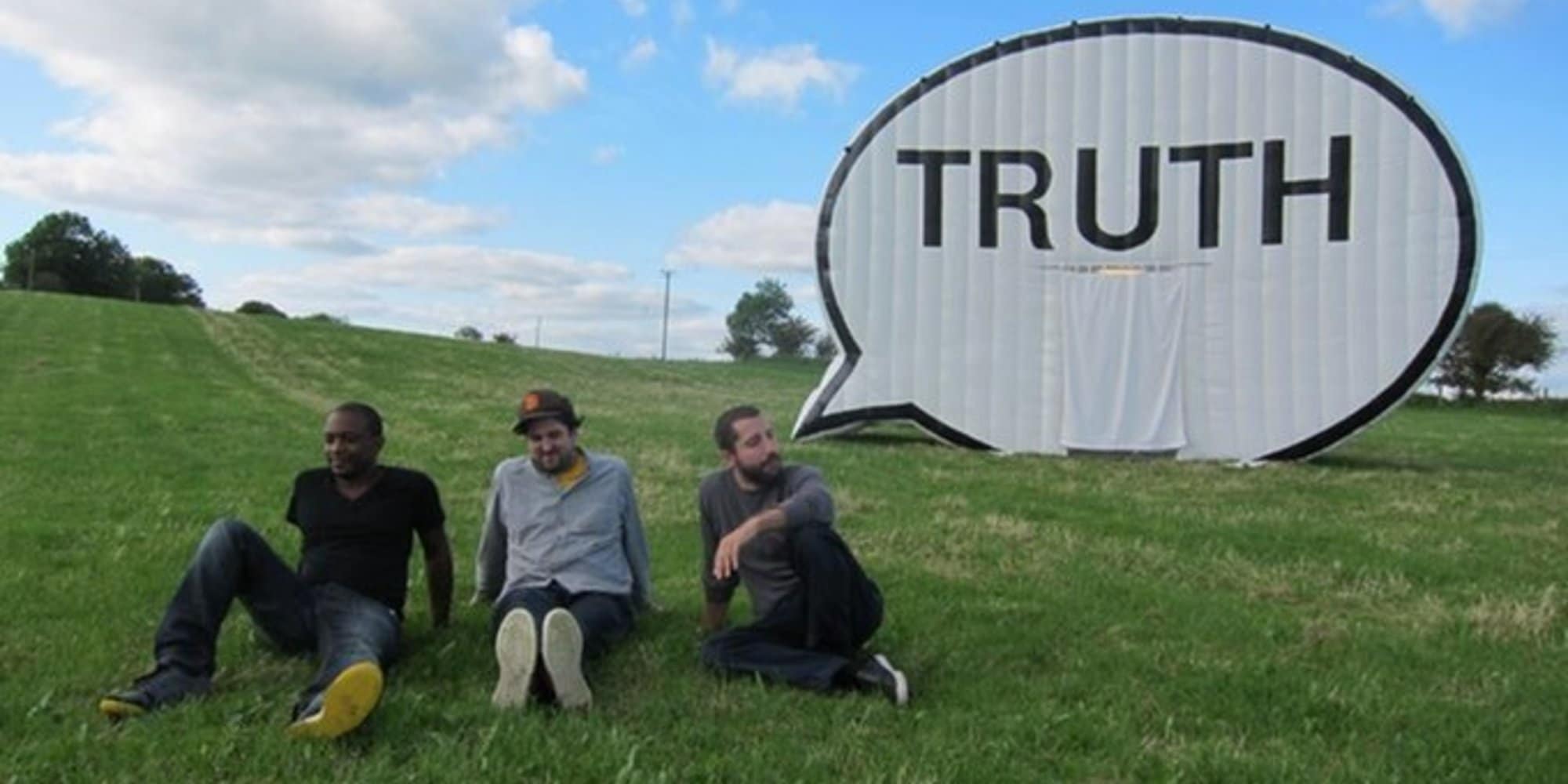 Des Moines, Ia on 28-29 September 2016: The Truth Booth—a giant, inflatable, portable enclosure in the shape of a thought bubble—is crossing the United States to Des Moines, Iowa.  Its presentation in Des Moines is co-sponsored by Artist/Architect Mitchell Squire and the Greater Des Moines Public Art Foundation with community support.

The Truth Booth is a participatory public art installation that functions as a video recording studio. The exterior has the word ‘TRUTH’ boldly printed on the side.  The interior acts much like a photo booth, but serves to compile 2 minute long video responses from the public. Once seated inside people are invited to record their opinions and thoughts as they finish the statement: “The truth is…”.

Everyone’s experience of the world is a bit different—we all have different life experiences, background beliefs, personalities and dispositions, and even genetics that shape our view of the world.  The Truth Booth is an opportunity to create conversations among residents who inhabit the same geographic region, and expand our collective understanding of how the city defines what is real, authentic, valuable or true.

Access is on a walk-up basis, and it is free to participate. The community and visitors are invited to give semi-anonymous statements in two minutes or less. Participants do not need to give their names, but it is possible their faces could be seen in Truth Booth videos. The only instructions are to complete the thought, “The truth is…”

YOUR VIEW OF TRUTH MATTERS IN DES MOINES!

“The project is about hearing the voices of those who are underrepresented,” says Hank Willis Thomas. “We live in a society that is primarily celebrity-oriented. This is a project that is democratized. Everyone is anonymous. I realize in that context you can learn so much from so many people. Seeing someone as young as eight and someone as old as 80 has been powerful.”

The Truth Booth has traveled to a range of contrasting regions — from South Africa to Afghanistan to New York City. The concept was inspired by Nelson Mandela’s words in the book “Long Walk to Freedom” when he said, “The truth is we are not yet free; we have merely achieved the freedom to be free, the right not to be oppressed.”

Throughout this long-term project the video footage will be compiled and edited into a video artwork. To expand and engage with audiences, the movements of The Truth Booth and sample responses will be tracked, edited, and categorized on a website. Ultimately, the goal of this project is to try to capture as many definitions, confessions and thoughts on The Truth as possible, creating a diverse ‘portrait’ of people across the globe.