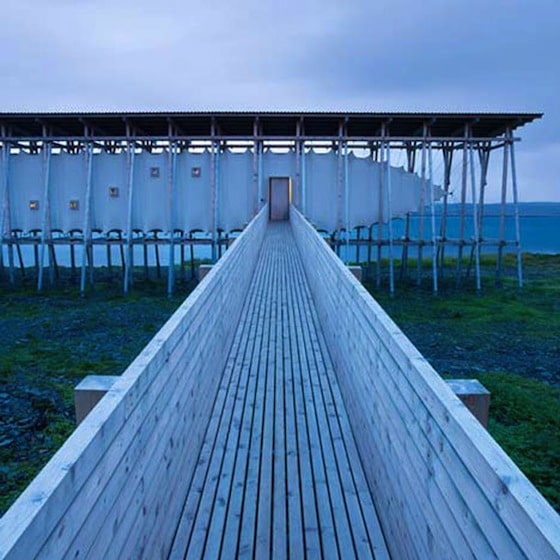 More than 350 years ago in Europe, fear and war ruled the continent. The Black Death of the 14th century had decimated the population, and the upheaval of a century of religious wars that began with the Reformation were catastrophic. With this backdrop the witch-hunt craze in Northern Norway’s Finnmark took place – the victims are now memorialized at the Steilenset Memorial for all time.

Located in Norway’s northeasternmost town (population: 2,000) above the arctic circle, you now find an arresting shrine to 91 people in the area who were tried and burned at the stake in the 17th century for the crime of witchcraft. Centuries later, the Steilneset Memorial for the Victims of the Witch Trials in Vardø officially opened June 23, presided by Her Majesty Queen Sonja of Norway.

Sturla J. Stalsett, general secretary of the Vardø Church City Mission, pointed out during the opening ceremonies, the memorial is meant to remind us of the ongoing danger of collectively creating scapegoats. If historical circumstances seem peculiar now, the intent behind the work addresses larger moral claims.

ABOUT THE ARTIST & ARCHITECT

Zumthor and Bourgeois already were working together on an art/architecture project for Dia:Beacon museum in Hudson, New York (2003), that ultimately was not realized. The new collaboration seemed a natural.

Since Bourgeois, who died in 2010, was 94 at the start of the memorial design in 2006, she enlisted her longtime assistant, Jerry Gorovoy, to help execute her ideas and asked Zumthor to go to the site first for his impressions. As Zumthor put it,“She was to make the art installation, and I would make the shell.”

To memorialize the 77 women and 14 men who were victims of the witch hunt, Zumthor envisioned a long building with a taut wood-frame structure and a sailclothlike walls, to be perched atop the rocky, granite coast. Inside the elevated structure, he designed small windows randomly punched on both sides to commemorate those executed.

Zumthor designed a separate building for Bourgeois’s piece, an aluminum chair with gas flames shooting out of the seat. In this rather literal evocation, the burning chair is reflected in seven oval mirrors placed on metal columns in a ring around the fiery seat, like judges circling the condemned.

"What are we going to do — tear down Vasari's wall?"
See it split, see it change