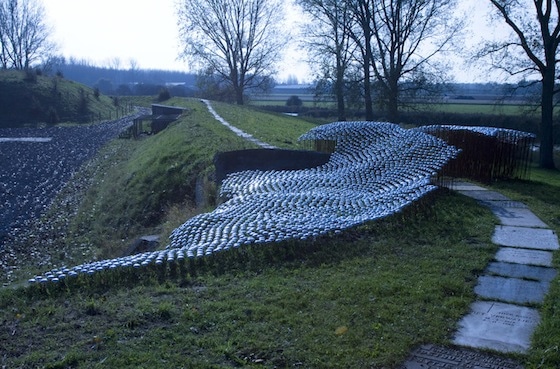 The installation Sound Architecture in Autumn III is a site specific composition from 5,000 chrome bicycle bells that are swaying in the wind of the polder in a natural way, as a reed. The movement causes them to “call” to each other in a rather subtle manner with a soft twinkling noise. The movement and sound are entirely dependent on the amount and wind direction. The location and composition of the starting point is the center of an old gun on the embankment base of the old fort. The ruin (old fort) was used during the German occupation in World War II.

A location-based installation, Violins of Wind, shows different ways of migration. The starting point is an exotic musical instrument. The rebab is a type of string instrument, named in the 8th century and later popular along Islamic trading routes — particularly North Africa, southern Europe and the Far East. It is considered the predecessor of today’s violin. The installation consists of three violins, three cellos and three bass instruments. Each instrument has a string which can be tuned in harmony with the others. The starting point for the speaker cabinet design and its construction is the construction of the Spring Balsam bud, a plant originating from the Himalayas, which acts as an immigrant and has spread throughout the world as so-called weeds. Both the distribution of plant species as well as the migration of people transcends the imagined borders, thus helping to enrich the native species. The Rebab represents this idea: Without immigration we would not know the Rebab, with the result that the violin might not, or in a different form, would have existed.

TEU is a metaphor for our culture and industry standardization. Everything around us is completely automated and efficiently developed. Also, the global transportation and container harbors. The term TEU, Twenty feet Equivalent Unit is the unit of a standard shipping container and is also used to indicate the capacity of a container ship and container ports. The location is a former cargo port in Amsterdam, which disappeared with the arrival of the container. When the sun goes down, the container is illuminated from within and refers to the transparency of jute skin to the vulnerability of many dockworkers used to work there. The very rare application of the polyester and jute skin, will be destroyed over a period of several years. In the background is the continuous sound of a modern container terminal.

From 1993 he had his own architecture practice and focused primarily on designs and concepts involving various architectural, furniture and interior projects. He received several architectural stipends from the government and had exhibitions in museums and galleries such as NAI in Rotterdam, Central Museum Utrecht in the Netherlands and the Martinez Gallery in New York. Since 2001, his work shifted to conceptually and autonomous work in which architecture is still a recurring theme.
He constructs site-specific installations and sculptures that questions how people relate to their environment by technology, both high tech and with more earthy, rural construction methods.

It’s fascinating to see how we try to control our lives and even nature itself by using and relying completely on technology.

Natural processes are part and subject of many of his works. He is interested in how nature and humans organizes itself: the consistency of growth and decay, processes of evolutionary adaptation to a changing environment. In particular, his interests include how people derive from technology development in response to the nature and the elements. Making art and culturing falls in it together. His work is a dialogue between nature and technology.

To show and investigate this matter in his work, he combines technology with natural and rural elements. Nature has it’s own order, time and rhythm.

Each work is a metaphorical and conceptual treatment of sound, space, and material.