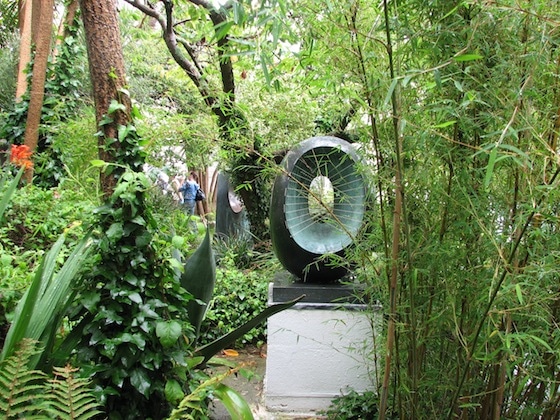 Visiting the Barbara Hepworth Sculpture Garden, St Ives, Cornwall, England is a unique experience, offering a remarkable insight into the work and outlook of one of Britain’s most important twentieth century artists.

Barbara Hepworth first came to live in Cornwall with her husband Ben Nicholson and their young family at the outbreak of war in 1939. She lived and worked in Trewyn studios, now the Hepworth Museum, from 1949 until her death in 1975. Following her wish to establish her home and studio as a museum of her work, Trewyn Studio and much of the artist’s work remaining there was given to the nation and placed in the care of the Tate Gallery in 1980.

Finding Trewyn Studio was a sort of magic, wrote Barbara Hepworth; here was a studio, a yard and garden where I could work in open air and space. When she first arrived at Trewyn Studio, Hepworth was still largely preoccupied with stone and wood carving, but during the 1950s she increasingly made sculpture in bronze as well. This led her to create works on a more monumental scale, for which she used the garden as a viewing area. The bronzes now in the garden are seen in the environment for which they were created, and most are in the positions in which the artist herself placed them.

Three Public Art Projects by Ronald van der Meijs
Walk Around the Building; Drive or Bike By It; Fly Over It