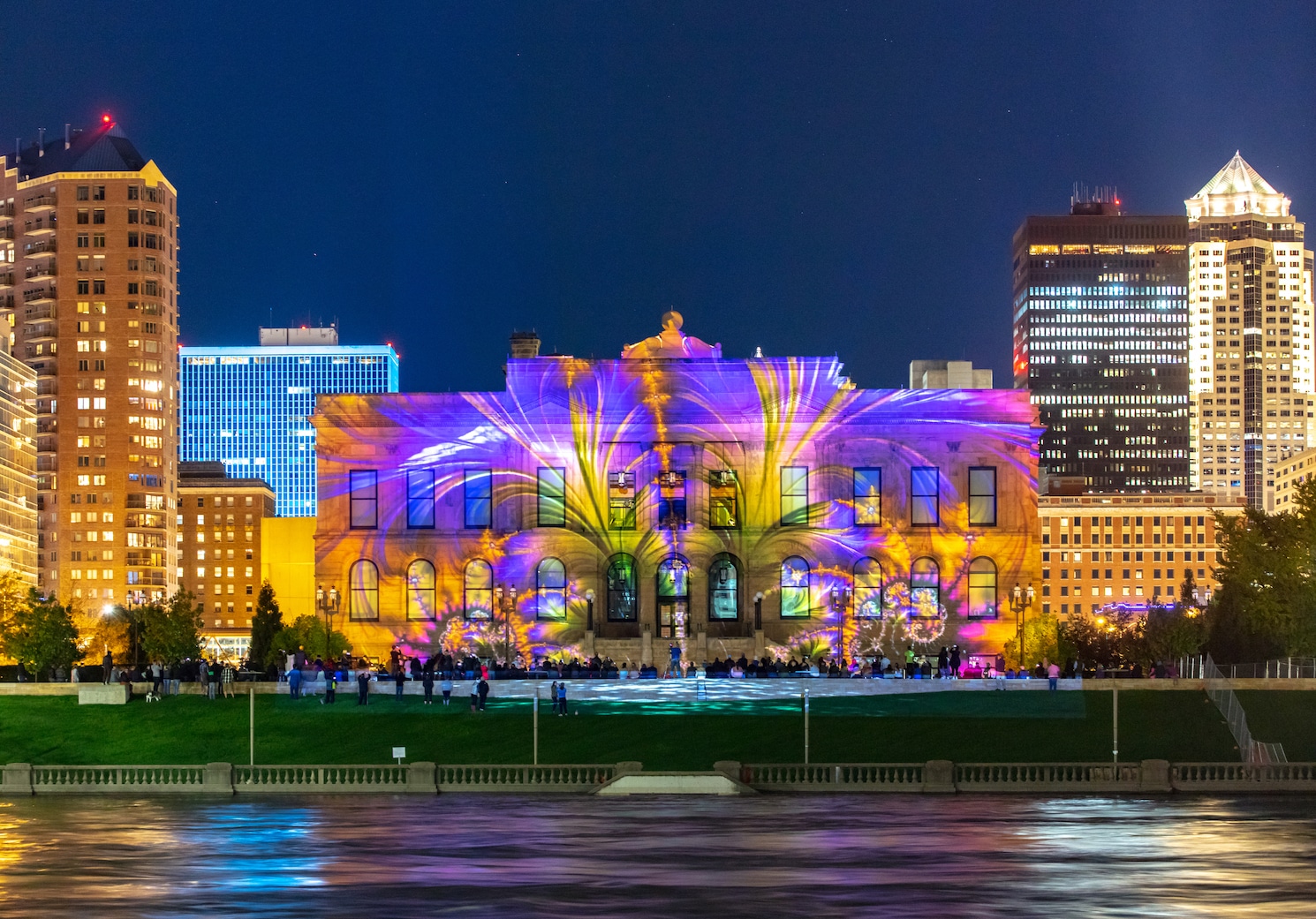 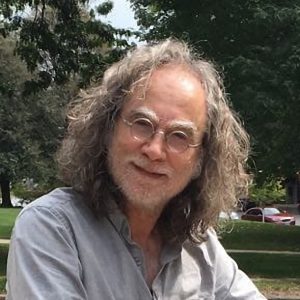 The site-specific, public art project called “Mental Banquet: Painting with Lights” was created in 2018 by the artist Oyoram (aka Yorame Mevorach). This temporary public art project launched a new art form in Iowa. The artist developed the music score in collaboration with Rhakeem Alpoe (aka Shaquille Phillips), Jack Gallup and Melvin Veach.

“Mental Banquet: Painting with Lights” was presented at 8 PM, Sunday evening, 14 October 2018 and projected again at 9 PM on Tuesday evening, 16 October 2018. Admission was free for both public events. The experience was a thrilling visionary feast between real architecture and a virtual tale. The October 16 presentation coincided with the United Nations’ annual celebration of “World Food Day.”

“Mental Banquet” was designed for the east-facing facade of the World Food Prize Hall of Laureates on the west bank of the Des Moines River at 100 Locust Street in downtown Des Moines (see “About the Site”.) The project was viewed from any area with an unobstructed view of the east exterior face of the building.

Oyoram’s process of mapping architecture expanded the conventional projection of content matching the size of the building structure. “Mental Banquet” captured the space, the architecture details, and the ambiance that emerged from the location.

A groundbreaking spectacle, “Mental Banquet: Painting with Lights,” engaged the public with an expression of rhythm and form that also revealed a story about the site. The building’s historical function as a library and cultural center melded into a new vision of honoring individual advancements in improving the global food supply. “Mental Banquet” expressed the acts of going, growing, changing, and the processing of time.

“Oyoram is well known for his off-screen digital projections,” said M. Jessica Rowe, director of Greater Des Moines Public Art Foundation. “The project was a standout, and reflected the artist’s interest in complex systems of aesthetics, architecture and technology.”

Embodying artistic traditions of teamwork to unparalleled extents, Oyoram’s Mental Banquet: Painting with Lights (2018) celebrated both the triumph of technology and the splendor of our natural world. The artist combined his aesthetic from nature’s formal beauty and exuberant ornamentation with the Beaux-arts building.  The dimensions of the project Mental Banquet: Painting with Lights— approximately 72 x 164 feet (22 x 50 meters) — mirrored the dimensions of the east facade of the Hall of Laureates.

Designed in 1899 by Architects Smith & Gutterson as the main branch of Des Moines Public Library, this restored Beaux-Arts style building is today known as The World Food Prize Hall of Laureates. The ornamented facade includes classical details and sculptural enrichments, such as symmetrical arched and pedimented doors, columns and windows. The building was built in 1900-03 as part of a plan to develop the riverfront in Des Moines. It is located at 100 Locust Street, along the Principal Riverwalk between Walnut and Locust Streets in the heart of the city.

About 17,000 years ago, a few highly skilled homo sapiens artists were doing what I am trying to do today: tell a story by painting and engraving on stone walls. The art was discovered in 1940, in Lascaux cave in Dordogne, a region in southwest France. After Picasso visited the cave in the 1950’s, he reportedly emerged and exclaimed: “We have invented nothing.” Miró once said, “Painting has been in a state of decadence since the age of caves.”

But I have been intrigued by more than the value of cave paintings. These were drawn about 14,000 years before the invention of writing!... What a long learning process to transform visual drawings into symbols - letters - words and sentences with meaning.

Observing our way of life today, at first I was worried: we are reading less and less, we are using icons, short messages and bird sounds to communicate. We no longer use our pen and even our purchases are signed with a finger. On second thought and maybe third, I changed my mind. Maybe we are not regressing, maybe we are in a process of elaborating a new language that will include literal and pictorial fragments; a universal language of the mind transcends countries and cultural borders.

Today the cave’s stone has become a building and I am drawing visual poetry using
light rays on its façade that, similar to a human face, has a lot to reveal.