Yorame Mevorach (also known as Oyoram) is a Franco-Israeli artist and filmmaker. Born in Jerusalem in 1951, he first studied engineering, but was quickly drawn to the cinema. He received an undergraduate degree in film at Beit Zvi School for the Performing Arts in Ramat Gan, and moved to Paris where he studied cinematic theory at the Sorbonne (Université Sorbonne Nouvelle – Paris III).

By 1984, he had established his reputation as producer and director with the legendary satirical French magazine, Hara Kiri/Charlie Hebdo and created the first original fiction made for the emergent video-cassettes market in France (a box office success).

Through the 1970s and 1980s, Oyoram developed a unique cinematographic language on the margins of the French film industry. His principal preoccupations were short length films, often made for French television. In addition to innovations in the narrative formats, there were important formal innovations related to his preoccupation with the place of the spectator in the space where the films were projected. His large scale installations led to films which allowed the viewer a greater degree of autonomy.

In 1993, Oyoram founded a company Cinéma hors écran (Offscreen Motion Pictures) not only to continue with his experimentation into the narrative dimensions of the medium but also into the forms going beyond the mechanics of the cinematic language to imagine “film” projected into a variety of new settings.

Pierre-Henri Deleau, co-founder “la Quinzaine des Réalisateurs” at the Cannes Festival, said that Oyoram’s art, “leaves open the question as to whether he is a poet making films or a filmmaker making poetry.”

Two years after founding Cinéma hors écran, Oyoram entered into a partnership with the LVMH group which allowed him unprecedented freedom to continue his tireless effort to expand the physical, technical and conceptual boundaries of film.

His visual art work has been commissioned by prestigious companies including Cartier, Van Cliff & Arpel, Sony, and Louis Vuitton.

Oyoram’s visual inventions have included small eye-glass lenses used to reveal the wearer’s subjective viewpoint to a 15 meter high clock, a spectacular metaphor dramatizing time as a circus ring. A designer, script-writer, and director, Oyoram experiments with immersive cinematic experiences as in the 2003 traveling exhibit Diamonds and the Power of Love shown in Tokyo, Las Vegas and Paris, featuring 11 mannequins brought to life by the magic of image- projection. In Retrophobies, a composition of 26 films simultaneously playing on large screens, Oyoram fused art and technology to invent “Vunettes” for an individual audio-visual experience in a public space. He also pioneered the seamless mix of painted canvas and moving images in Double You See, a traveling exhibition shown in 2006-2007  in Paris and Hamburg. Since 2007, when he imagined into creation “virtual windows” in the famous rotunda Dior Avenue Montaigne, Oyoram has designed monumental visual moving fresques for Dior.

With the completion of his studio in Des Moines, his recent work has moved into immersive environments that can be seen as the culmination of many decades of experimentation into the poetic and sensorial possibilities of a cinematic visual language. 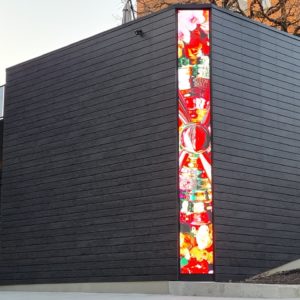