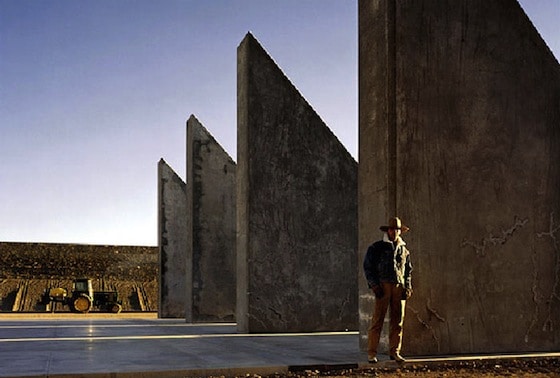 At eighty feet high, a quarter of a mile wide, and one and a quarter miles long, the sculpture “City” is roughly the scale of the national mall in Washington, D.C., making the artwork, located in Garden Valley, Nevada, one of the largest sculptures ever created. The sculpture is so large that when the energy department did a survey flyover of the area, they mistook it for a military project.

BEGUN IN 1972 by artist Michael Heizer, this “earthwork” is made entirely of dirt, rocks, and concrete, constructed with heavy machinery. Heizer (American, born 1944) is renowned for his large-scale sculptures and earth art (or land art), and produces works that cannot fit into a conventional museum setting, except in photographs.

Earthworks and other unsellable “land art” like this were a reaction to the commercialization of art in the 1960s. Heizer came up with the idea for “City” in 1970, when he was in the Yucatan studying the serpent motif in the ball court at Chichen Itza. He was 24. The previous year he finished “Double Negative,” a spectacular 1,500-foot-long, 50-foot-deep, 30-foot-wide gash cut onto facing slopes of an obscure mesa in Nevada, a project that required blasting 240,000 tons of rock. It was quickly recognized as the archetype of what people were beginning to call Land Art or Earth Art or Environmental Art. It made a huge impact. In his words, City “is based on an awareness that we live in a nuclear era. We’re probably living at the end of civilization.”

Despite its enormous size, “City” was built with incredible precision and is accurate to Heizer’s plans down to a sixteenth of an inch. The work is located on a large parcel of private land owned by the artist. His work is supported by the Dia Art Foundation and the Lannan Foundation. Heizer is currently completing the work with a team of roughly a dozen. “City” is not yet available to the public.

NOTE: Michael Heizer’s family has lived in Nevada since the 1880’s. One grandfather, Ott F. Heizer, was a mining engineer, the other, Olaf P. Jenkins, was the chief geologist for California. State maps in California are still named after him. Robert F. Heizer, Heizer’s father, was an archaeologist from Lovelock, Nev., who taught at the University of California, Berkeley. He specialized in the Great Basin, in California and in the Yucatan. He also worked in Egypt, Bolivia and Peru. He was writing a book about the ancient transport of massive stones when he died.

Michael Kimmelman wrote in a 1999 NY Times article: “You can’t understand Michael Heizer without remembering what his father and grandfather did. At the root of his art are archaeology, geology and anthropology.”