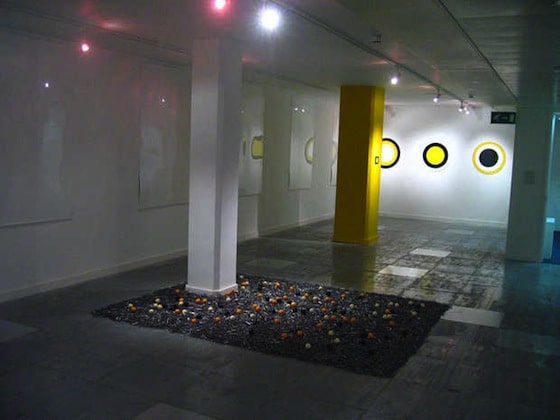 Two large-scale commissions in public art spaces are lighting up the cold and dark in and nearby London through January 2012. These public art works are visually engaging by careful and imaginative use of diverse materials; they are outreaching in ways that address issues of communicating between parties and people who differ.

Gbadamosi is a British conceptual artist and writer. His work addresses themes of identity and art theory, often using his trademark motif of yellow, white and black. He received his Doctorate in Fine Art from the Slade School of Fine Art, is a member of the Interdisciplinary Research Group Afroeuropeans, University of Leon, Spain, and the ‘Black Body’ group, Goldsmiths College, London.

In his interview broadcast on the BBC World Service (‘The Strand’ on December 20-21, 2010), Abdoulaye Konaté discusses his use of the metaphor of the guinea fowl, specifically its cyclical plumage, to stimulate thought about the lack of transparency in human agency with regard to power relationships, particularly those which involve religious and political power.

In his rather solemn “Pouvoir et religion,” Mali cotton carries the symbolic load of feathers. For east Africans, the work’s outreach resonates with “kanga:” Swahili for guinea fowl and its namesake the printed textile wrapper that always includes a social saying, often with reference to traditions.

Michael Heizer's "City"
"What are we going to do — tear down Vasari's wall?"