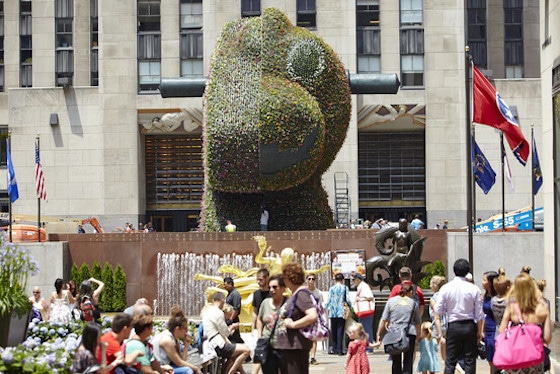 The rocking horse on display at New York City’s Rockefeller Plaza is a 37-foot-high public art installation composed of 50,000 flowering plants and is the work of American artist Jeff Koons.

Titled “Split-Rocker,” the work was first exhibited in France in 2000 and has been on display at a private museum in Maryland since 2013, according to Rockefeller Center’s website.

Koons produced just two editions of the sculpture. He owns the one installed in Rockefeller Center; the other is in the collection of Glenstone, the private museum in Potomac, Md., owned by Mitchell P. Rales, the industrialist, and his wife, Emily. Larry Gagosian, the New York dealer who represents Jeff Koons is paying for the Rockefeller Center installation.

The public artwork’s debut in New York coincides with a retrospective of Jeff Koon’s work at the Whitney Museum of American Art, which runs from June 27 to October 19.

The Whitney Museum describes Jeff Koons as an artist who has “pioneered new approaches to the readymade, tested the boundaries between advanced art and mass culture, challenged the limits of industrial fabrication, and transformed the relationship of artists to the cult of celebrity and the global market.”

"H" is for Harlem
Call for Artists' Qualifications