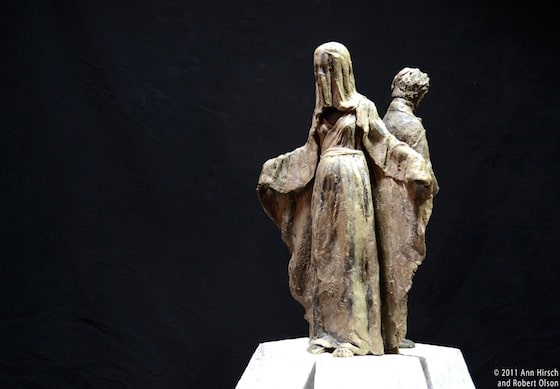 The above quote is from Edgar Allen Poe’s The Raven.

So let’s get ready to celebrate on Thursday, January 19 — It would’ve been Edgar Allen Poe’s 203rd birthday!

In the hair-raising short story, The Pit and the Pendulum, horror master Edgar Allan Poe penned: “Else there is no immortality for man.” But if all goes as planned, Poe’s legacy will live on — in glass, bronze and perhaps stone — as a work of public art. Design proposals celebrating the controversial author’s life and work were recently unveiled for Boston’s Edgar Allan Poe Square. You might ask, why here? Well, Poe was born in Boston on January 19, 1809.

“Poe has a rich, complicated, sometimes funny, sometimes very dramatic history with the city,” said Boston College professor Paul Lewis. For years this scholar has been campaigning on Poe’s behalf, hoping to spread what he calls “Poe Fever.”

Poe did get around before dying at the age of 40. He lived in cities including Richmond, Baltimore, New York and Philadelphia. But the writer’s stints in Boston were notable and formative. Poe returned after dropping out of college, and here he published his first book of poetry in 1827, his final works, and perhaps his most famous short story, “The Tell-Tale Heart,” in 1843.

The public art proposals are distinct, but all confront Poe’s fraught relationship with his hometown.

Ann Hirsch of Cambridge and Boston architect Robert Olson designed a work featuring Poe in the company of a mysterious, shrouded figure.

The Edgar Allan Poe Foundation of Boston and the Boston Art Commission selected the above finalists from a pool of 265 artists from 42 states and 13 countries, all vying to have their work adorn the small, city-owned plaza at the southeast corner of Charles Street South and Boylston Street, across from Boston Common.

If you’re inclined to comment on these proposals, then go on-line at http://poeboston.blogspot.com.

Note: Edgar Allan Poe (born Edgar Poe, 1809 – 1849) was an American author, poet, editor and literary critic, considered part of the American Romantic Movement. Best known for his tales of mystery and the macabre, Poe was one of the earliest American practitioners of the short story and is considered the inventor of the detective fiction genre.