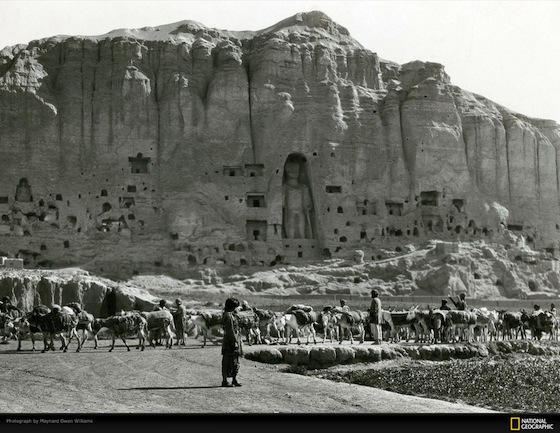 The permanence of art and the legacy of physical artifacts are fascinating subjects. Temporary art focuses on creative endeavors — no matter the shelf life. Ephemeral materials used, like ice, chalk and light, dictate the life of an artwork. In brief, intangible culture (artistic expression, oral history) is difficult to preserve.

What is considered cultural heritage by one generation may be rejected by the next generation, only to be revived by a succeeding generation. Preserving and maintaining for the benefit of future generations must be a deliberate act.

“Cultural property” such as monuments, historic places, and public art are among the “tangibles” considered worthy of preservation. Among the world’s great artistic and religious treasures were the three colossi Buddha statues, which looked upon a visually stunning region of central Afghanistan for about 1,500 years; they have been gone for 11 years.

On the cliff face of a mountain nearby, three colossal statues were carved 4,000 feet apart. One of them was 175 feet (53 m) high, the world’s tallest standing statue of Buddha.

Today, the massive caves where the Buddhas once stood are huge, empty pockets carved into cliffs that dominate the countryside. The recovered pieces — many the size of large boulders, others as tiny as pebbles — are stored in several shelters.

The Buddha statues survived the ravages of Mongolian conqueror and warrior Genghis Khan, centuries of wars and the natural wear and tear of the elements. One was 55 meters (180 feet) high, the other 38 meters (125 feet). Fragments of the statues were analyzed and experts determined they were once painted in brilliant shades of blue, pink, orange and red. They had been repainted several times, possibly because of fading.

A Fusion of Cultures
“The site testifies to the region’s rich Gandhara school of Buddhist art that, during the 1st to 13th centuries, integrated different cultural influences from East and West,” according to UNESCO.

“The art,” The New York Times Holland Cotter wrote in 2001, “is a compendium of ancient styles, from India, Persia and Gandhara, where Greco-Roman-inspired traditions survived. For years the Buddhas were dated the 5th century and assumed to be prototypes for rock-cut sculpture in China, notably in the caves at Dunhuang.

In the 1990s the caves were filled with mostly Shiite refugees fleeing the civil war raging in Kabul and other places in Afghanistan. The Bamiyan region is predominantly Hazara, an ethnic minority of Shiites. Thousands of Hazara were killed by in 1893 by the Pashtun King; thousands more reduced to serfdom or slavery at Pashtun hands.

Beginning in 1994, the Hazara’s new enemies were the Taliban, whose version of Sunni Islam doesn’t recognize Shiites as Muslims. The Taliban’s enmity toward the Hazara of Bamiyan was brutal.

The Taliban vs. the Statues

At the close of the 20th century, the Taliban bombed the mountain above the statues frequently, cracking the niches that held the statues and damaging the colossi Buddha. By winter 2001, pleas came from around the world to spare the statues. Pleaders included the Buddhist Thai monarchy and Sri Lanka, itself home to a set of giant Buddha statues. “UNESCO, the Metropolitan Museum of Art in New York, and a leading Islamic scholar in Cairo were also among those begging the Taliban not to carry out their threat to the Bamiyan statues and other Buddha images in museums across the country,” wrote Barbara Crossette in The New York Times.

To no avail. In late February 2001, the Taliban’s leader, Mullah Mohammad Omar, ordered them destroyed. By early March 2001, the statues were rubble.

The monuments and archaeological remains of the Bamiyan Valley are public property, owned by the State of Afghanistan. However, large parts of the buffer zone are in private ownership.

With the support of the governments of France, Britain, Italy, and Japan, work was begun on restoring the destroyed artifacts. United Nations Educational, Scientific and Cultural Organization (UNESCO) placed the cultural landscape and archaeological remains of the Bamiyan Valley on its World Heritage List and List in Danger. The focus has been to consolidate the Buddha niches, to safeguard the artifacts that survived the destruction of the Buddha statues and to render the site safe.

The Afghanistan government will have the final decision on any such steps.The management of the serial property is under the authority of the Ministry of Information and Culture.There are eight guards protecting the site against vandalism and looting, with additional resources provided by the Ministry of Interior such as a dedicated police contingent for the protection of cultural property.

Almost a year ago, in March 2011, UNESCO initiated a long-range plan for preserving the valley’s cultural heritage and the remains of the Buddhas, which overlooked a Buddhist monastery. It was concluded by Afghan officials and international experts that the site is potentially ready to be removed from the List of World Heritage in Danger by 2013.

... “I sat engaged in guessing, but no syllable expressing”
“Green Design” Eye Candy