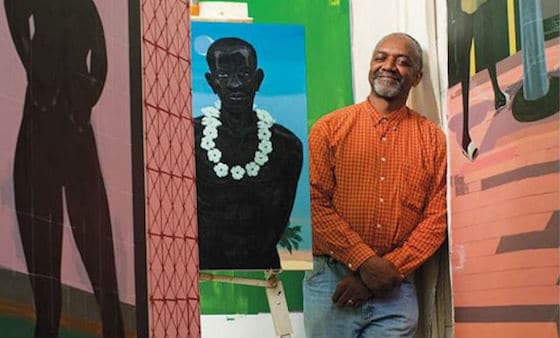 Kerry James Marshall has received the 2014 Wolfgang Hahn Prize. The prize is endowed with maximum prize money of 100,000 € (about $137,000). The jury consists of the Director of Museum Ludwig, a guest jury member and the board members of the Gesellschaft für Moderne Kunst.

“A painter’s painter as much as he is an astute social critic, Kerry James Marshall has built an uncompromising body of work that includes collage, sculpture, animation, and video-making alongside a deep attachment to painting as a medium. In his hands, painting is both intimately connected to a historic painterly tradition and also fiercely tied to the present—its social injustices, race relations, power dynamics, and political realities. An exploration of blackness, and a call for the representation of the black subject—so long left out of art history—mark his oeuvre. The Wolfgang Hahn Prize is proud to recognize this African American artist whose oeuvre testifies to one of the most engaged positions in painting today.”

The criteria are: (1) consistent development of artistic creation over a period spanning decades and (2) international recognition among experts. (3) A further requirement is that the artist’s work is not yet adequately represented in the museum, the aim being to buy a work or group of works by the artist for the museum’s collection.

In Des Moines, Iowa, Kerry James Marshall has designed a public art project to honor the National Bar Association founders: courageous African-American attorneys who — in Des Moines, IA — changed the course of American history in 1925. Called “A Monumental Journey,” it is projected to be completed by 2015.