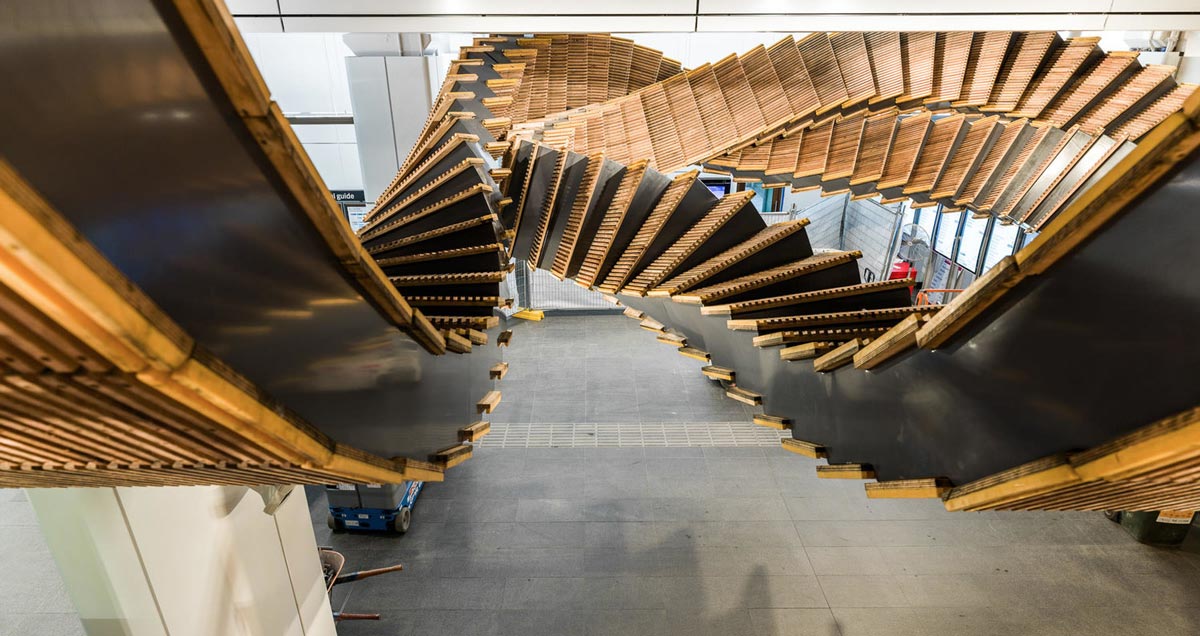 Artist Chris Fox has created a mind warping public sculpture in Sydney, Australia’s heritage-listed underground railway station Wynard. Interloop is Fox’s answer to repurposing the old wooden stairs after being replaced by metal ones, part of a major plan directed by local redevelopers who commissioned the artist to help transform the city’s financial district.

First installed in 1931, they were among only seven wooden escalators left in the world when they were removed in 2016. But their wide wooden treads could be a trap, especially for high heels. Guide dogs were also injured after getting their claws stuck in the combs of the escalators.

The accordion-shaped work comprises of 244 wooden treads and four combs from the original Wynyard escalator. It is approximately 5000 kilograms and measures 50 metres in length.

“The artwork explores the idea that people are stationary on an escalator whilst also travelling, allowing for a moment of pause that occurs mid-motion. The sculpture resonates with people in this state, referencing all those journeys that have now passed and are interlooping back.”

The work of Chris Fox investigates the conceptual and material boundaries between art and architecture, altering sites through installation, object, and drawing. His work embraces a tension that forces us to recalibrate our perception of the artworks notional form, function, environment and our spatial relationship within it.

Fox has completed a Bachelor of Visual Arts and a Bachelor of Architecture both with Honours, and has recently completed a Master of Fine Arts. He is a senior lecturer at the University of Sydney in Art Processes and Architecture, and has been the recipient of many awards, grants and residencies. Fox has exhibited in numerous solo, group and collaborative exhibitions in Australia, the USA and Europe, with an established sculptural practice of large scale public and private commissioned artworks.

To see more of Chris Fox’s work, you can head on over here.