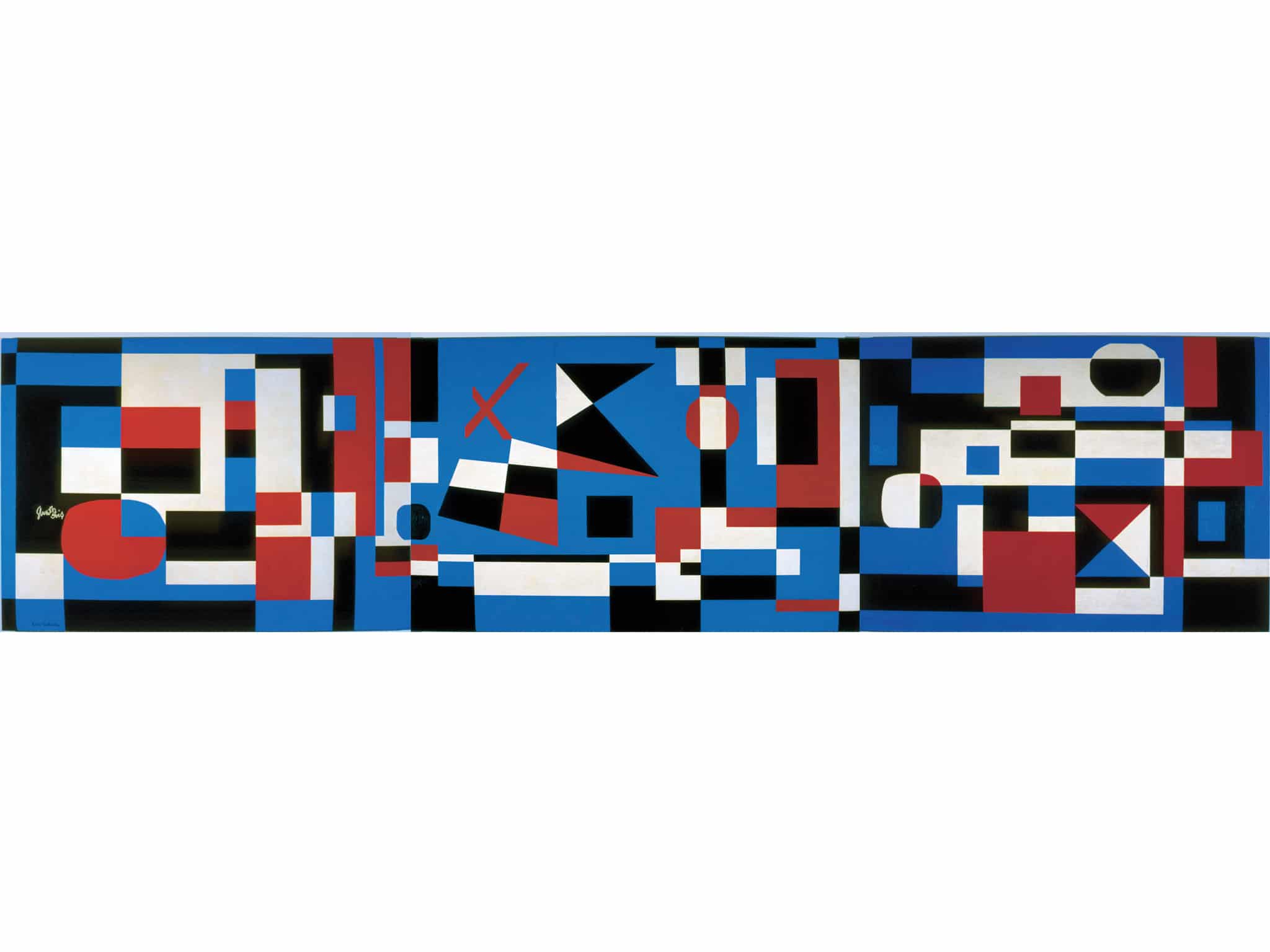 Widely recognized as a major figure in American art, Davis won many awards and received honors from various museums and art organizations throughout the 1950s. The” Allée” commission marked Stuart Davis’ return to mural painting after a fifteen year hiatus. Davis visited Drake University in June of 1954 to meet with Eero Saarinen to select a location for his commissioned mural. During his visit to campus Davis noted the Hubbell dining hall: “I remembered the whiteness of the room – its ceiling and walls – the black floor, the blue sky outside, those huge windows, and the red rectangles of the brick dormitories.” (A. Boyajian and M. Rutkowski, eds., “Stuart Davis: A Catalogue Raisonné,” vol. II, New Haven, Conn., 2007)

"'Allée' is a French word meaning an alley or long vista. It is a long painting. Its length over-powered my studio and made a deep impression on my mind. Also, there is another French word with the same sound which means go." I like this association. I like the variety, the animation, the vigorous spirit which is part of college life. This feeling of energy and vigor was in my mind during the painting of the mural. — Following my first visit to the Drake campus, I carried back to my studio a strong impression of the simplicity and directness of the architecture. I set out to make the mural harmonize with the room. The composition of the mural is vigorous in keeping with its surroundings. The figures in the mural are severely rectilinear. I did not clutter it up with detail, yet there is considerable variety of size and positional relationships. — "I remembered the whiteness of the room—its ceilings and walls—the black floors, the blue sky outside those high windows, and the red rectangles of the brick dormitories. Therefore, I decided to use blue as the main color on a white background and chose red and black as the other two colors. I determined to use only four colors. This was a real challenge but I was sufficiently interested and took enough time to succeed. As a result, I feel the mural is more colorful than if I had used many more colors.

"Do not look for meanings and symbolism which are not there. Instead, look for the color-space relationships which give the painting its vigorous tone and its structural feeling. The placing of the figures and colors were done with feelings and thoughts which were the products of my interest in life. The meaning of the mural will change as the viewer gives meaning to it.

"I feel I was successful in doing what I set-out to do which does not depend on events or depicted replicas for its meaning. I tried to achieve simplicity and directness. When I think of a college campus, I think of intellectual issues debated with vigor, of football, poetry, jazz music, of excitement. These were in my mind when I painted the mural. During the long months the mural was in my studio, I had the notion it would look all right when it was mounted; now that I have seen it in the Dining Hall, I feel that it does."