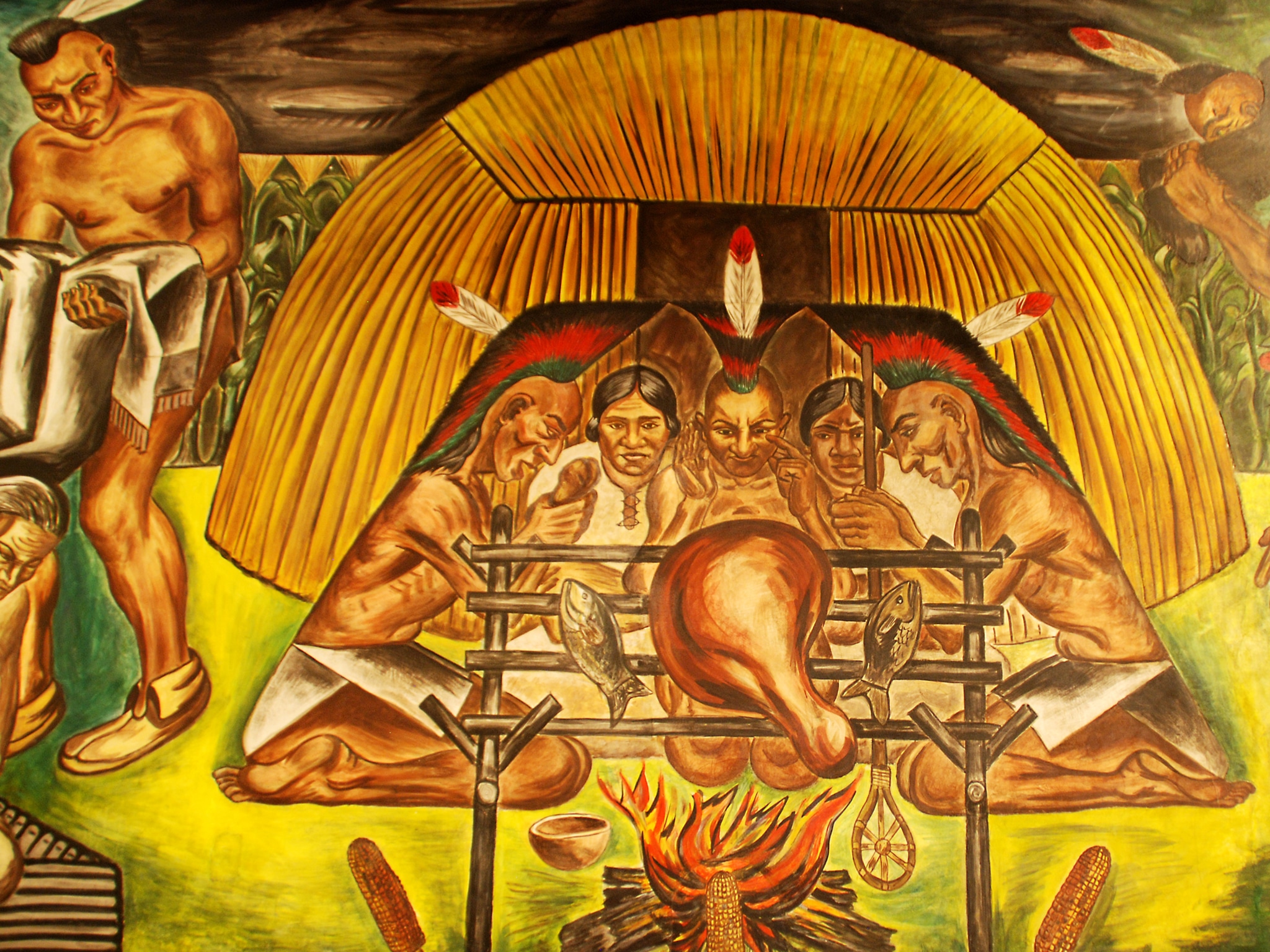 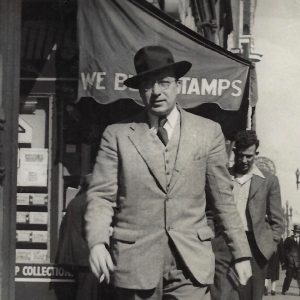 A Social History of Des Moines

The mural cycle took from September 1937 to December 1941 to complete. Artist Harry Donald Jones was assisted by three other artists, Opal Adams, Paul Paffinbarger, and Paul Backensten, and a crew of 18 WPA workers, mainly plasterers.

“The Children’s Reading Room was decorated under the WPA in true fresco on all its walls and pillars with a mural style called by its designer, Harry Donald Jones, A Social History of Des Moines. Des Moines writer Henry Felsen prepared a written guide to the mural and its symbols which can only be summarized here. The Social History begins with the spiral nebula theory of the creation of the earth, proceeds through cave men and the beasts which roamed Iowa in the glacial era, and then devotes considerable space to Iowa’s Indian past, with symbols of Sac and Fox legends. An Indian trapper represents the fur trade in which valuable furs were traded ‘for such useless articles as outlandish, impractical clothing, green umbrellas, and great quantities of cheap, glittering beads and small mirrors. Often [the Indian] was befuddled with liquor, so he might be more easily cheated.’”

“The Louisiana Purchase [1803-04] is represented by [President Thomas] Jefferson dropping coins into Napoleon [Bonaparte]’s hand. The corn at Jefferson’s feet represents ‘a harvest of peace;’ Napoleon stands on graves representing the futility of war. Both hold steel, Jefferson a sickle curved and useful in cultivation; Napoleon a sword, straight and useful only in war. The same event portrayed in the Knoxville Section mural is portrayed here in its brutal aspect — the 1845 entry of white settlers to claim land in western Iowa. Wick-i-ups are torched, a pregnant squaw and her husband are forced at gunpoint from the land in which their ancestors are buried.”

“Another wall contrasts Des Moines’ treatment of Kelley’s Army of 1,400 job-seekers marching to Washington, D.C., with that of Omaha: Des Moines fed the unemployed and built rafts to float them down river; Omaha forced their evacuation.”

“A large section in the next panel shows a family turning from social disorder to order (especially a New Deal order), from chaos to security. For chaos, a man in an ivory tower is shown who is blind to conditions around him and hands clasp the banner of lip service (symbolized rater literally), while a pile of gold with a mask of falsity and a valentine heart symbolize a Biblical truth: ‘The love of money is the root of all evil.’ Planes soar for war, smokestacks stand idle, figures whisper to symbolize ‘power behind the scenes,’ the secret deal, etc. The family turns from these bad social conditions to a bright world brought about by engaged, interested planners. Other symbols of social order are found in an elderly man receiving a Social Security check and a building designed by Le Corbusier ‘for use rather than ‘in the style of’.’”

“The mural is, in summary, an elaborate index of ideas and as such an important social document, quite apart from its considerable merits as a mural. With the destruction of the Cedar Rapids TRAP mural, it is quite without comparison in Iowa.”

“Jones was appointed head of the WPA for the city of Des Moines with responsibilities for the Iowa portion of the INDEX OF AMERICAN DESIGN. In about 1937, Jones led the team commissioned to paint murals for which the Des Moines Public Library had been waiting for years. The WPA project, A Social History of Des Moines, was painted in true fresco on an appropriately large scale: irregularly shaped, seven-walled room on the ground floor of the 1903 library building—what was then the Children’s Reading Room. The work was slow going because Jones had so many other administrative duties, but at last it was finished in 1941. Jones’ mural nearly suffered the fate of two other major mural cycles in the state of Iowa. In 1951, the library board voted to paint over the mural; it was saved only by the intervention of community art patrons such as Louise Rosenfield Noun. In 2006, the Des Moines Public Library moved to a new building, and the old building, with its mural, became the home of the World Food Prize.”

The World Food Prize Hall of Laureates is open to the public on Tuesdays and Saturdays. Admission is free of charge, and visitors have the opportunity to take a guided tour of Harry Jones’ A Social History of Des Moines. Private and group tours are also available.