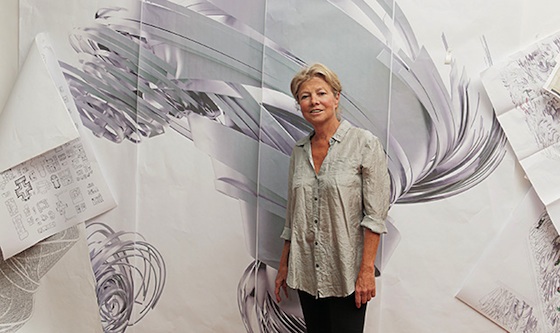 A recent ARTINFO interview with Alice Aycock by Daniel Kinitz announced two new exhibitions. Opening on April 23, 2013, at New York University’s Grey Art Gallery will focus on drawings from the first 20 years of her work, and another, opening April 21, 2013, at the Parrish Art Museum, in Water Mill, New York, will explore drawings and small objects from the past two decades.

Alice Aycock is a significant contributor to the public art realm. Her major works include Cyclone Fragment for the San Francisco Public Library, a 200 ft. long suspended sculptural installation with moving parts for the Sacramento Convention Center, and the East River Roundabout, a sculptural rooftop installation, for the East River Park Pavilion at 60th Street in New York City. In 1998, she completed Star Sifter, a large architectural sculpture for the rotunda of the Terminal One at JFK International Airport. Aycock’s 2004 GSA commission Swing Over was for the entrance to the Fallon Building in Baltimore, and Whirrls and Swirls and a Vortex on Water for Central Broward Regional Park in Broward County, FL are among her recent celebrated public art projects.