A leading figure of abstract expressionism, Willem de Kooning receiving formal training in fine and applied arts at the Rotterdam Academy. In 1926 de Kooning came to the United States. In 1935, under the auspices of the Works Progress Administration (WPA) Federal Art Project, de Kooning was able to devote himself fully to painting for the first time. In 1938 de Kooning started his first series of Women, which would become a major recurrent theme. De Kooning’s first solo show in 1948, established his reputation as a major artist.

The Women of the early 1950s were followed by abstract urban landscapes, parkways, rural landscapes, and, in the 1960s, a new group of Women. However, it was not until 1953, when de Kooning exhibited a controversial group of paintings of women, that he came to fame. These paintings were built from slashing brushstrokes and slicing lines. His paintings of women caused a sensation, partially because they were figurative when most of his fellow Abstract Expressionists were painting abstractly, but also because of their blatant imagery. Aggressive brushwork and strategically placed high-key colors in these paintings merged with images of toothy snarls, pendulous breasts, enlarged eyes and blasted extremities to reveal a woman seemingly congruent with some of modern man’s sexual fears. Some of these paintings also appeared to reference ancient Greek and Prehistoric fertility figurines, with the large eyes and squarely chiseled bodies.

De Kooning’s versatility was also revealed through his explorations in sculpture. While in Rome in 1969, de Kooning began experimenting with small clay sculptures; this work led to the production of large-scale bronze works similar to some of his painted figures in the dynamic push and pull of the forms. Throughout his long career, de Kooning’s art has been featured in numerous national and international exhibitions. 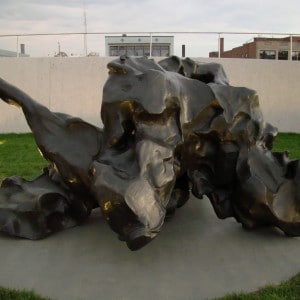