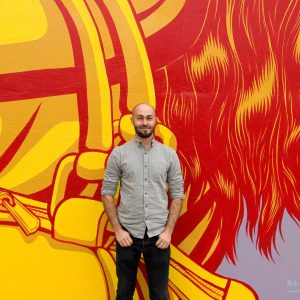 A native of Washington State, Nick Goettling’s experience creating dynamic, engaging, and attractive public art comes from a solid foundation of fine art and hands-on construction skills. He has used this background to created large works for institutions and city governments such as the City of Portland, the City of Tacoma, the University Village Neighborhood Association in Chicago, Northeastern Illinois University, and Chicago’s Museum of Science and Industry.

He works with historians, community leaders, and local artists to develop designs. Recently he collaborated with students, scientists, and National Science Foundation representatives on a year long Artist In Residence program for Chicago’s Museum of Science and Industry.

Artist In Residence at the Ghost Town art space, Cisco,UT, 2016 – Helped renovate a future art-space in a ghost town in Utah, while also creating personal work inspired be the town.

Artist In Residence at the Museum of Science and Industry, Chicago, 2014 – Collaborated with a poet to create an interactive digital artwork that responds to a National Science Foundation initiative to pair innovators with STEM curriculum to tackle the problem of Chicago’s food deserts.

The Puffin Foundation Artist’s Grant, 2011 – Received a grant to create instructional booklets that teach at-risk youth the basics of observational drawing while incarcerated, which fosters valuable introspection and builds self-esteem.

The Evergreen State College, 2008 – BFA, with two years at The School of the Art Institute of Chicago 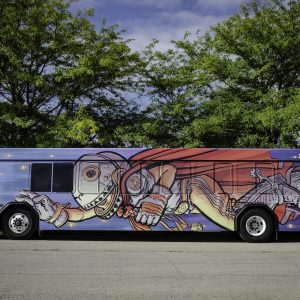