Born Marco Polo di Suvero in Shanghai, China where his father was stationed as a naval attache for the Italian government, the artist’s family came to San Francisco when he was seven. Years later, as a student at the University of California, Santa Barbara, his work as a sculptor began to flourish. After transferring to Berkeley, he graduated in 1957 with a degree in philosophy.A self-trained welder and licensed crane operator for more than 30 years, he has overcome both personal and professional challenges. In 1960, while preparing for his first solo exhibition, he was critically injured in a freight elevator accident at his part-time construction job, breaking his back, which kept him off his feet for two years. While in rehabilitation, he learned to work with an arc welder. His early works were large outdoor pieces that incorporated railroad ties, tires, scrap metal and structural steel. This exploration has transformed over time into a focus on I-beams and heavy gauge metal. Many of the pieces contain sections that are allowed to swing and rotate giving the overall forms a considerable degree of motion. His distinctive, large bold pieces can be found all over the world. He continues to be the subject of multiple exhibitions and his commitment to emerging artists is undeniable through the Athena Foundation and the Socrates Sculpture Park. di Suvero has received the Lifetime Achievement in Contemporary Sculpture Award from the International Sculpture Center and, in 2005, the 11th Annual Heinz Award in the Arts and Humanities for his commitment to aspiring artists. 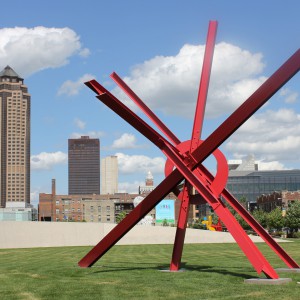