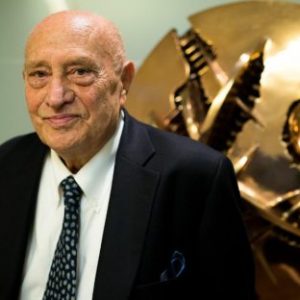 Arnaldo Pomodoro was born in 1926, in Morciano, Emilia Romagna, Italy. From the mid-1940s until 1957 he served as a consultant for the restoration of public buildings in Pesaro, while studying stage design and working as a goldsmith. In 1954 Pomodoro moved to Milan, where he met artists such as Enrico Baj, Sergio Dangelo, Lucio Fontana, and others. His work was first exhibited that year at the Galleria Numero in Florence and at the Galleria Montenapoleone in Milan. In 1955 his sculpture was shown for the first time at the Galleria del Naviglio in Milan.

Pomodoro visited New York in 1956 and traveled around Europe in 1958. While in Paris in 1959 he met the artist Alberto Giacometti and Georges Mathieu, before returning to the United States where he organized exhibitions of contemporary Italian art at the Bolles Gallery in New York and San Francisco. In New York the following year Pomodoro met Louise Nevelson and David Smith. He helped found the Continuità group in Italy in 1961–62. The sculptor traveled to Brazil on the occasion of his participation in the 1963 São Paulo Bienal, where he was awarded the International Sculpture Prize. A solo show of his work was included in the Venice Biennale of 1964. In 1965 he was given the first of many solo exhibitions at the Marlborough galleries in New York and Rome.

The artist taught at Stanford University in 1966. In 1967 Pomodoro was represented in the Italian Pavilion at Expo ’67 in Montreal, and he received a prize at the Carnegie International in Pittsburgh. In 1968 he taught at the University of California at Berkeley; in 1970 he returned to Berkeley to attend the opening of an exhibition of his work that originated there and later traveled in the United States. During the late 1960s and early 1970s he executed commissions for outdoor sculpture in Darmstadt, New York, and Milan. In 1975 a Pomodoro retrospective was sponsored by the Municipality of Milan at the Rotonda della Besana.

Since the mid-1970s, Pomodoro has continued to gain renown for his unique engagement with fundamental geometric shapes, notably the column, cube, pyramid, sphere, and disc. His massive architectonic forms suggest a continual process of self-destruction and regeneration. His work has been the subject of numerous exhibitions at major museums, including Musée d’Art Moderne de la Ville in Paris (1976), University Art Museum at University of California in Berkeley (1981), Columbus Museum of Art (1984), Hakone Open Air Museum in Kanagawa (1994), Centre of Arts in Cairo (1997), and Palazzo Magnani in Reggio Emilia (2005). In 1988 Pomodoro was invited to create a one-room installation for the Venice Biennale. He is perhaps best known for his outdoor public installations and their dramatic alteration of familiar vistas, including the Urbino Cemetery (1975), Amalienborg Square in Copenhagen (1982–83), Belvedere Fortress in Florence (1984), Cortile della Pigna in Vatican City (1989–90), United Nations Plaza in New York (1996) and Palais-Royal in Paris (2002). Pomodoro has lived a simultaneous career as a set designer for productions such as Aeschylus’ Oresteia at Teatro Massimo in Palermo (1983), Gluck’s Alceste in Genoa (1987), Ahmed Shawqi’s Passion of Cleopatra in Gibellina (1989), Eugene O’Neill’s Plays of the Sea in Rome (1996), and Puccini’s Madame Butterfly in Torre del Lago (2004), among others. The Fondazione Arnaldo Pomodoro, founded in 1995, for which Pomodoro serves as director, has been dedicated to the exhibition and funding of artists for over a decade. Pomodoro lives and works in Milan.

Pomodoro is most famous for his spheres made in bronze is showing us, through his works, a structure of the life itself. The outer smoothness of his sculptures combined with the inner complicated design that looks like a clockwork machinery remind us of the intricate designs of nature and the infinite complexity of life. 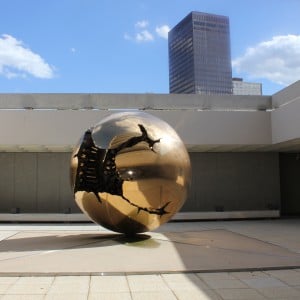