A school of goldfish acts as an underwater orchestra in Hong Kong-based artist Henry Chu’s “Fish Harp” — a new media artwork wherein an array of wineglasses arranged on a piece of glass have sound sensors triggered by the movement of the scaled swimmers below. 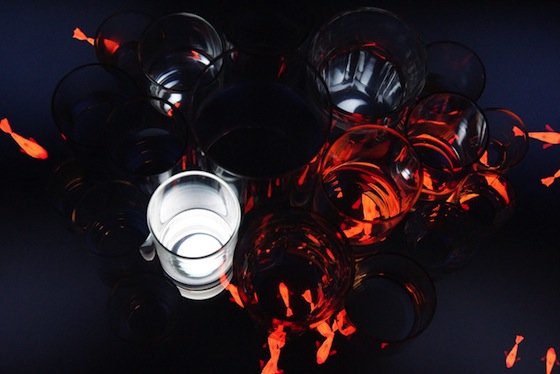 Chu’s project is a simultaneous statement of real and exaggerated — the fish themselves versus the music they create. Chu created the fish, which are artificial simulations thereof shown on a tabletop screen.

How one views the project is meant to enhance the sense of realism and natural beauty presented when one watches fish swimming below the water in a live setting. As reported on Co.design, Chu’s artistic vision was to “[extend] a 2-D screen into 3-D space…reflecting the light of a flat display through a collection of transparent objects to create some sort of a mirage.”

The decision to use fish as the medium playing the music came out of inspiration Chu gained from a Chinese expression. The expression generally translated, says, “like flowers in the mirror and the moon in the water.” A proverb referencing illusion and taking into account the similarity of the words “moon” and “fish” in Chinese, this was the line of thinking that led to fish as the chosen element. (That and fish were more physically feasible than the moon, according to Co.design)

Further blending of the artistic and musical comes into play through the sight of the fish in motion and the shape of the glasses –both circular– which then creates tones akin to those of the glass harp. It is almost as if no part of Chu’s piece is without a primary or, at the very least, supporting purpose to the overall theme intended in Musique Plastique. The only aspect that seems less calculated, (though if this is meant to evoke feelings of “real fish” that can be debated), is the lack of tonal organization that is almost immediately noticeable if one listens to the fish for more than a few seconds. There is no pattern; no synchronized school of fish hitting harmonious notes and covering familiar jingles.

You can listen to the fluid tones of the “Fish Harp” here:

Henry Chu is a Hong Kong based new media artist / interactive web designer. After he finished his Electronic & Electric Engineering Degree in University of Auckland, New Zealand, he came back to his birthplace Hong Kong and started his digital design career in 1998.

In 2004, Henry Chu set up his own design studio pill & pillow to extend his creativity and technical expertise to help clients to create interactive online experience. He has received various awards from local and international design and art competition festivals.

He was a guest lecturer of The Hong Kong Poly U, School of Creative Media of City University and The Art School. In 2007, he joined Hong Kong Designers Association as an executive committee member. He joined the board of directors of Videotage in 2008. He was a member of jury of Digital Media in London International Advertising Awards in 2007 and judge of FWA Site of the Year in 2007 and 2008.