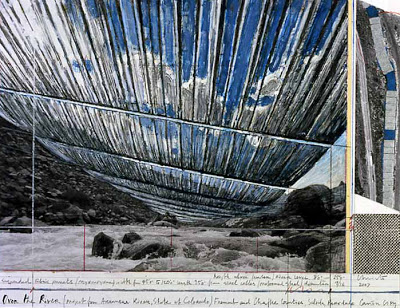 It looks like artist Christo will (finally) get to wrap Colorado’s Arkansas River.

On Monday, a federal government agency agreed to let New York-based artist Christo Javacheff, who is known professionally by his first name, proceed with his plan to temporarily suspend flat panels of silvery fabric in several sections along a 42-mile-long stretch of Colorado’s Arkansas River.

The Bureau of Land Management, which oversees the river, said it had given its final approval to the artist’s plans so long as he agreed to over 100 measures it thinks could prevent or offset any disruption to the river or the towns nestled alongside it. The BLM expects over 400,000 visitors to drum up to $121 million in economic impact for the area. (The area typically attracts over 740,000 visitors annually.)

“After careful consideration of the potential impact to the Arkansas River and the wildlife and plants that inhabit this beautiful area, we believe that steps have been taken to mitigate the environmental effects of this one-of-a-kind project,” said Ken Salazar, the BLM agency’s secretary.

The decision marks the first time since the 1969 passage of the National Environmental Policy Act that the BLM has allowed a work of art to complete an environmental impact statement, a land-use gauntlet that’s usually reserved for aspiring bridges, highways and dams. Because of the work’s complexity, Christo signed up for the two-year process of surveying, soil sampling, and analyzing, all meant to predict how a structure will affect its surroundings.

“Over the River” Project for the Arkansas River, Collage 2007
© Christo 2000, photo Wolfgang Volz