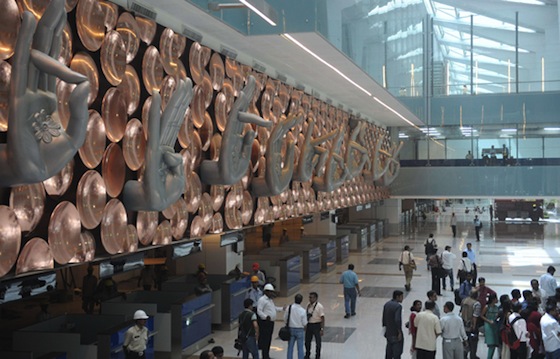 Anjolie Ela Menon’s mural, The Walled City, was commissioned for the Indira Gandhi International Airport (T3), New Delhi. “This street in an walled city is a microcosm of the Indian street. It is unique to our urban culture that the street is the arena for life itself,” says Anjolie Ela Menon.

“This is where people live, work, travel, ply their trades, interact, romance, play, celebrate and protest. Here human beings and animals co-exist in surprising harmony where where tradition and modernity blend seamlessly in a throbbing scenario of sound and color, creating endless street theatre,” she says.

Menon, who is considered as the country’s foremost muralist took over six months to handpaint the mural, according to an official of India’s Vadehra Art Gallery, which is supporting the artist.