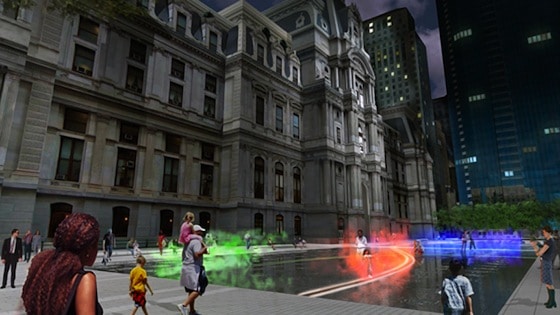 Last week was the groundbreaking for the $50 million transformation of Dilworth Plaza, the public space and transportation hub immediately west of Philadelphia’s City Hall.

US Department of Transportation Secretary Ray LaHood told the audience that was gathered: “All across America, there is work to be done on projects like this. Now is the time to connect people who need work with the work we need to do to improve our nation’s transit centers, highways, railways, airports and ports.”

By early 2014, Dilworth Plaza will be transformed into a sustainable, barrier-free, well-maintained, green public space with accessible connections to underground transit. The new Plaza will have a large lawn, tree groves, seating for 400, a programmable fountain and a café, the revenue from which will be used to help maintain the plaza. During winter, a portable ice rink will cover the fountain area.

A fascinating part of this project is a work of public art created by American artist Janet Echelman.

On March 3, 2011, Janet Echelman gave a TED Talk during the Threads of Discovery session. You must check this out! Taking Imagination Seriously by Janet Echelman

Janet Echelman art focuses on public art installations and sculpture. She graduated from Harvard University in 1987 with Highest Honors in Visual Studies. From 1988-1993 Echelman lived and worked in Bali, Indonesia before returning to America. She created her first permanent installation, She Changes, in 2005 in Porto, Portugal.

According to Sculpture Magazine, her work in Portugal charts “a bold new direction for sculpture” and is “one of the truly significant public artworks in recent years.”