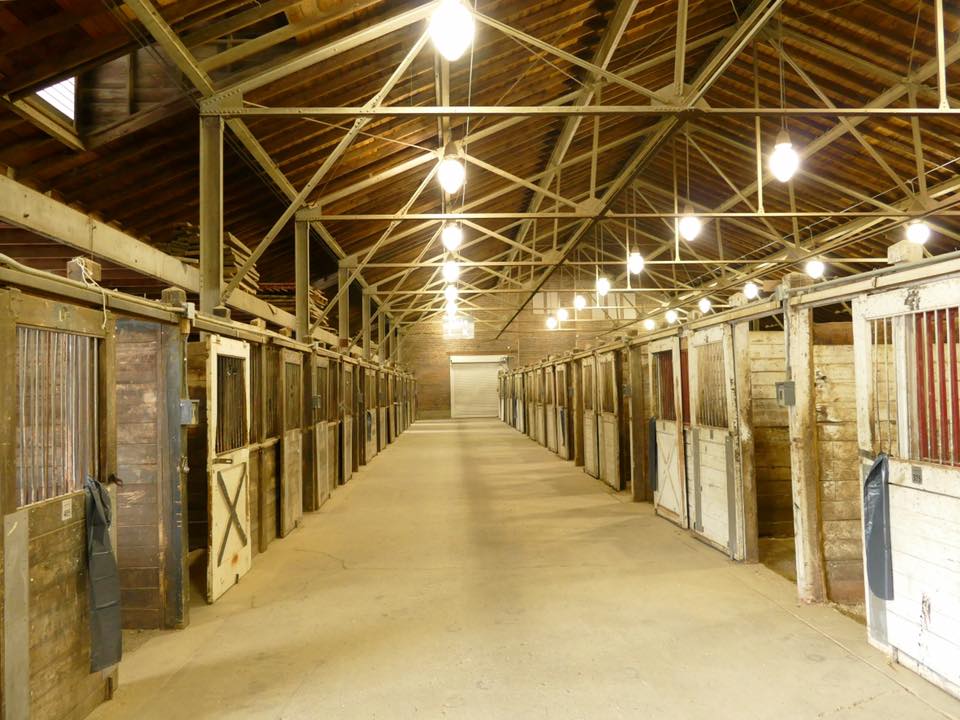 SWITCH is a new project by M12 Studio, and the third piece in a trilogy exploring equine culture  in rural America. The work overlaps between two sister spaces in Des Moines, Iowa. The Des Moines project was commissioned by the Greater Des Moines Public Art Foundation.

Located in the Horse Barn at the Iowa StateFair, Stall #406, from August 11-21, 2016, is the Equine Archive, a collection of equine objects, images, and texts. The installation combines shelving units and printed paper reproductions pertaining to equine husbandry and rural culture. The stacks of paper reproductions are held in place by some 60 plus used horseshoes collected from fair presenters and beyond. Visitors are encouraged to both peruse this archive and to take away printed materials that are relevant to their own experiences with equine culture. The centerpiece of the archive is a molded horse head used for tack display, rodeo and rope training. This piece is designed so that the eyes of the horse-head operate as a camera. This work simultaneously doubles as a transmission site for images that are captured in the barn. Captured images from the horse-head camera are projected onto a storefront of the Capitol Square building, at 400 Locust Street in downtown Des Moines.

Together, the installations that make up SWITCH encourage visitors to draw connections between the history of rural Iowa and its contemporary agricultural landscape, and to explore new avenues for cultural connection and discourse between rural and urban spaces.

The installation in the Horse Barn includes the Irish language poem “Switch,” which is a kind of critical/spiritual centerpiece for this project. The poem will be featured prominently and made available in both the physical archive at the fair and at the Capital Square projection site.

at the pain in a horse’s eyes.

If you’d a pair of dragging hooves on you, it’s short work

they’d make of the smile on your face.”

You could see that he understood, and his fellow-feeling

for the pain in the horse’s eyes;

and that dwelling on it so long he’d finally stolen

into the innermost space

of   the horse’s pain that I saw, too, trying to plumb

the depths of  pain that it felt;

until it was Turnbull’s eyes I saw starting out from

I looked at Turnbull and saw set under his brow

as I looked him up and down twice

the two, too-big eyes that were speechless with sorrow:

M12, aka M12 STUDIO, is an American artist collective and non-profit organization based in Byers, Colorado that features an evolving group of artist practitioners, curators, and designers. The M12 Collective is known for groundbreaking and award-winning creative projects that explore the aesthetics of rural cultures and landscapes. Working in the fields of art and design, projects explore community identity and the value of often under-represented rural communities and surrounding landscapes. The M12 Collective has been featured widely nationally and internationally through exhibitions and commissioned works including The 13th International Venice Architecture Biennale; The Chicago Cultural Center; Franklin Street Works; The 2011 Australian Biennial; The 2010 Biennial of the Americas; The Center for Land Use Interpretation; The Ewing Gallery of Art and Architecture at the University of Tennessee; The Kohler Arts Center in Wisconsin; The Contemporary Museum in Baltimore, MD; Wall House #2 in the Netherlands, and The Irish Museum of Modern Art in Dublin. For more information, visit M12 website