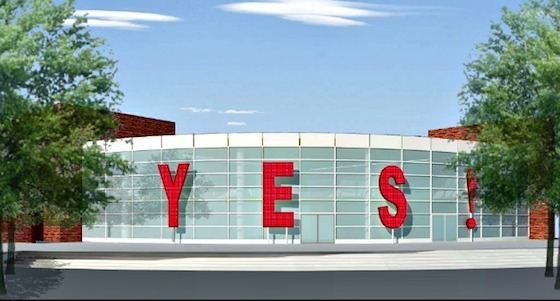 On 21 April 2014, The City of Boulder, Colorado, unveiled a new public art project on the curved glass wall to the north of the Main Boulder Public Library’s entrance.

The project will consist of four free-standing aluminum characters, YES!, with light visible through the red surfaces on the three letters and exclamation point.

Rosario Marquardt and Roberto Behar of R & R Studios, based in Miami, were also behind the “All Together Now” sculpture at 14th and Curtis streets in downtown Denver, Colorado. For the Boulder Public Library project, they were selected out three other semifinalists and 366 total applicants. The artists have received acclaim for creating fun, striking, iconic works across the country, and are noted for their bold use of scale and color for creative place-making.