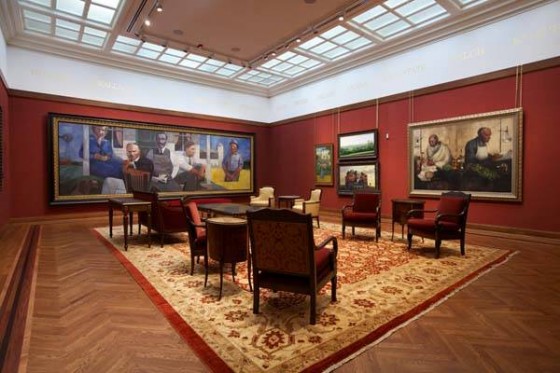 In honor of Chinese President Xi Jinping’s historic visits to Iowa [1985 and 2012] as well as that of his father Xi Zhongxun in 1980, the World Food Prize Foundation [hereafter WFPF] is requesting proposals and qualifications from artists resident in Iowa or with an Iowa connection [birth, education, training, prior residence] to create an original artwork in any medium commemorating those events and the special relationship of President Xi to the state of Iowa.

The proposed artwork should convey to the viewer element(s) / aspects / impact of the visits of the Xi father and son, with primary emphasis on the significance of President Xi Jinping’s two visits. The artwork will be permanently displayed in the Iowa Gallery of the WFPF Hall of Laureates building in Des Moines, Iowa.

BACKGROUND – VISITS BY PRESIDENT XI AND HIS FATHER
Xi Zhongxun visited Iowa in 1980 immediately after the normalization of diplomatic relations between the U.S. and China. At that time, he was serving as Governor of Guangdong Province, and was the leader of a delegation of governors from China who were welcomed by then Iowa Governor Robert Ray.

Governor Xi’s son, Xi Jinping, first visited Iowa in 1985 as part of an agricultural delegation when he was a county level Party Secretary in Hebei Province [Iowa’s “sister state” in China]. He met then with newly elected Iowa GovernorTerry Branstad and spent time in the city of Muscatine where he memorably stayed overnight in a family’s home. In

February 2012, now Vice President Xi Jinping paid a sentimental return visit to Iowa at the invitation of Governor Branstad during which he was welcomed at the home of Sarah Lande in Muscatine, feted at a “state dinner” at the Iowa State Capitol in Des Moines and toured an Iowa farm.

During that latter visit, the WFPF served as host for the 2012 U.S.-China Agricultural Symposium at which then Vice President Xi delivered the keynote address in the Hall of Laureates.

Links to two articles that describe the visits by President Xi and his father:
Seeds for Xi’s visit to Iowa planted in 1979
Iowa and China have come full circle

BACKGROUND OF THE WORLD FOOD PRIZE
The World Food Prize is the foremost international award presented to laureates from around the globe who have made exceptional breakthrough achievements increasing the quality, quantity and availability of food, thereby reducing hunger and malnutrition in the world. Created in 1986 by the late Nobel Peace Prize recipient and Iowa native Dr. Norman E. Borlaug, this annual $250,000 award has been informally referred to as the “Nobel Prize for Food and Agriculture.”

Information about the World Food Prize Foundation, which is a 501[c][3] non-profit organization, is available at www.worldfoodprize.org

SUBMISSION GUIDELINES
Proposals may be submitted in either electronic / digital [encouraged] or paper format and must include the following information:

proposed size is adjustable, based on the wishes of the WFPF

 The requested compensation for creation of the artwork, including proposed phases of payments

 At least three [3] examples of previous artworks completed by the artist, including any that the artist considers could help the WFPF understand the style and visual impact of the proposed artwork. More than three examples of prior artworks are welcome and encouraged.

 A preliminary sketch / drawing / model of the proposed artwork

NOVEMBER DUE DATE
Proposals must reach the World Food Prize office at [email protected] or at 100 Locust Street, Des Moines, Iowa, 50309 by 5pm CST, on Monday, November 2, 2015. The WFPF anticipates awarding a commission to create the artwork in December 2015. The completion and delivery date for the artwork is October 1, 2016.

QUESTIONS
Questions should be submitted in writing to [email protected]