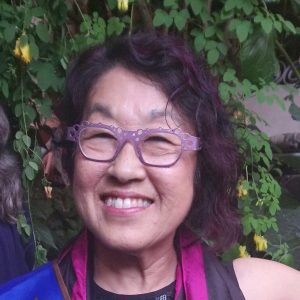 The painted and fused glass installation called “Slides” is integrated into the Laboratory’s visitor entrance. It is arranged within a triangular-shaped atrium. The exterior glass walls are faced with either a grid or row of glass sheets imprinted with a countryside vista or detail. There are four layers of translucent panels positioned in front of each scene of nature. This system was devised to offer opportunities to glide the panels along recessed-tracks and configure new relationships. Accordingly these lavishly colorful compositions can be overlapped or isolated.

Sato juxtaposed Iowa’s natural environment with the technology, evidence, and other images linked to laboratory work. Her witty assemblage offers an inexhaustible archive of analytical data. 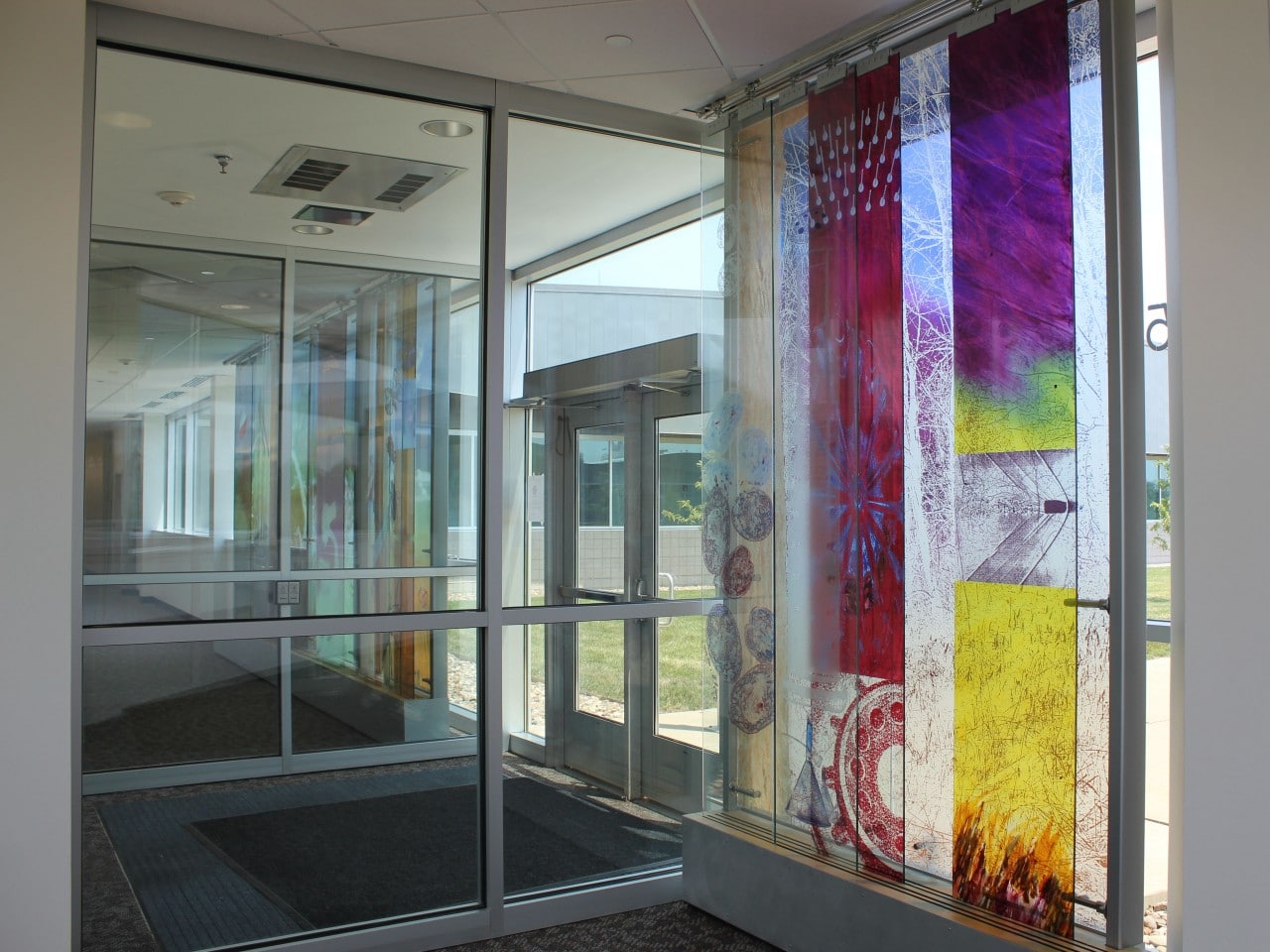 The angled north wall opposite the entrance holds the largest section. Four movable “slides” are layered against a grid of 12 stationary glass panels. The grid depicts rolling farm fields photographed on a snow-covered winter day.

Lightly screened on one of the “slides” are two long chains of nucleotides twisted into a double helix. Interests of the metrology and agricultural labs are featured in a flanking “slide”. Two ears of corn are separated by a seismograph drawing with characteristic up-and-down waves measuring ground motion beneath Iowa’s surface. Close-up details of corn is emblematic of the fruits of labor.

A more somber “slide” relates to death investigations. A faded slice of twisted rope dangles behind a pair of “open” autopsy scissors which are boldly sandblasted into the surface. Evidence includes a blood-red smear swabbed over the lower portion of the panel. Water quality is the subject of the fourth “slide.” Bathed with greenish-blue color, the panel portrays animal and plant organisms and the indigenous Black Crappie swimming into and out of this composition. In the center is a range map for fish species of Iowa. Along the opposite wall are 12 additional movable “slides” with landscape backdrops. In one of the “slides,” vapors rise from a crimson chemistry beaker.

There is a metamorphous of the hard-edge, iconic chemistry beaker into soft-focus, idyllic baby toes – the sole figurative element in the artwork. Prenatal and neonatal research is captured in a neighboring “slide,” too. Rich yellow pigment is spread over the surface in a painterly fashion. It is embellished with repeated patterns of red blobs intended as a blood test. There is a lyrical quality in Sato’s study of insects. The pesky gypsy moth, a speckled-colored corn rootworm, an iridescent copper and green Japanese beetle, and a ground beetle are portrayed with spontaneous movement and a frugal use of detail. In the agricultural lab, these insects become specimen samplings for crop and foliage infestations. 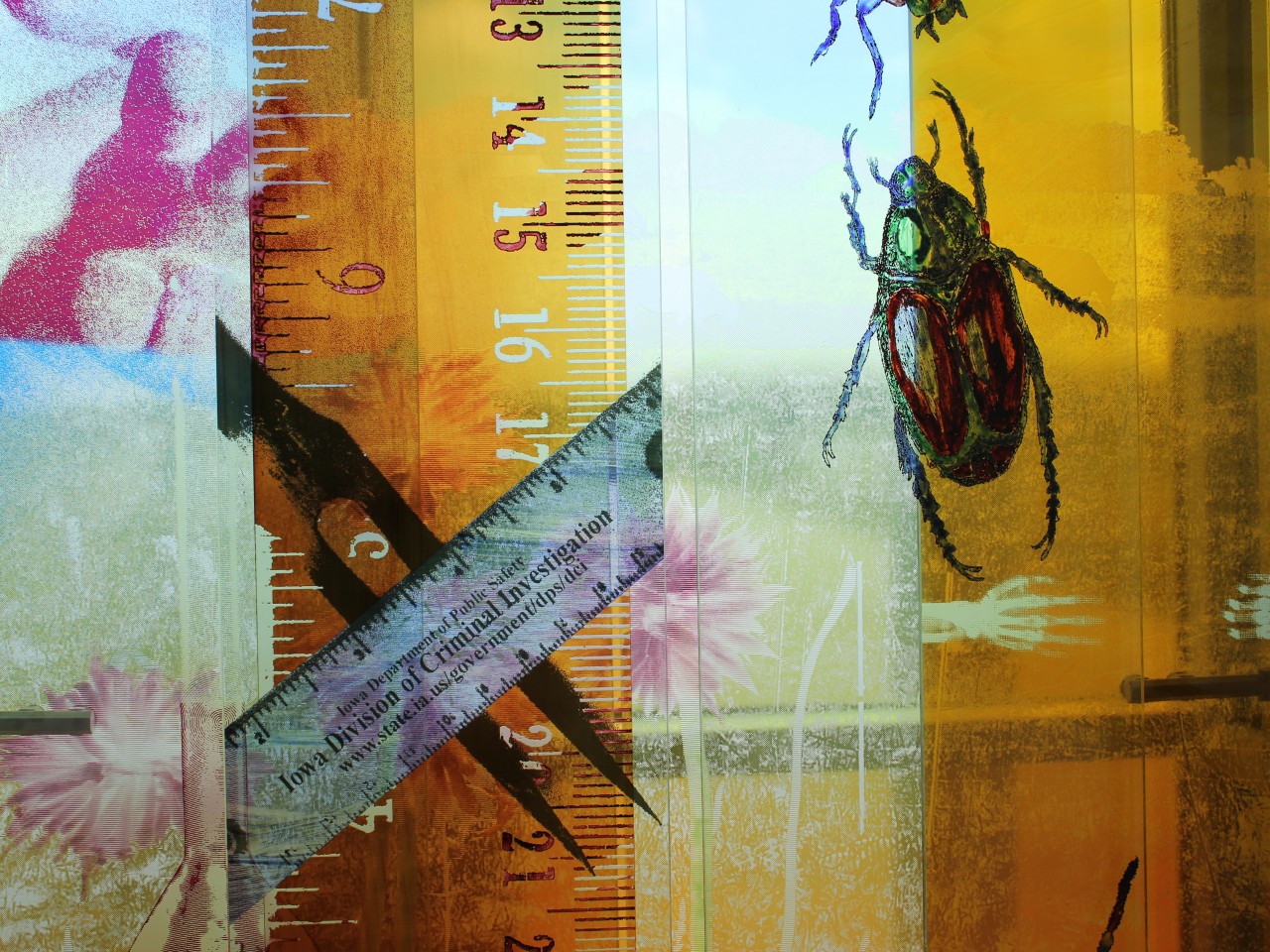 A “lifted” fingerprint is enhanced on a pale-blue “slide.” Russet-colored ridges of the fingerprint contain abstractly coded lines of letters and numbers – for the crime lab. Dangling in the panel’s upper left corner is a dusting brush coated with power on its soft rounded bristles – a tool used to reveal this hidden information. 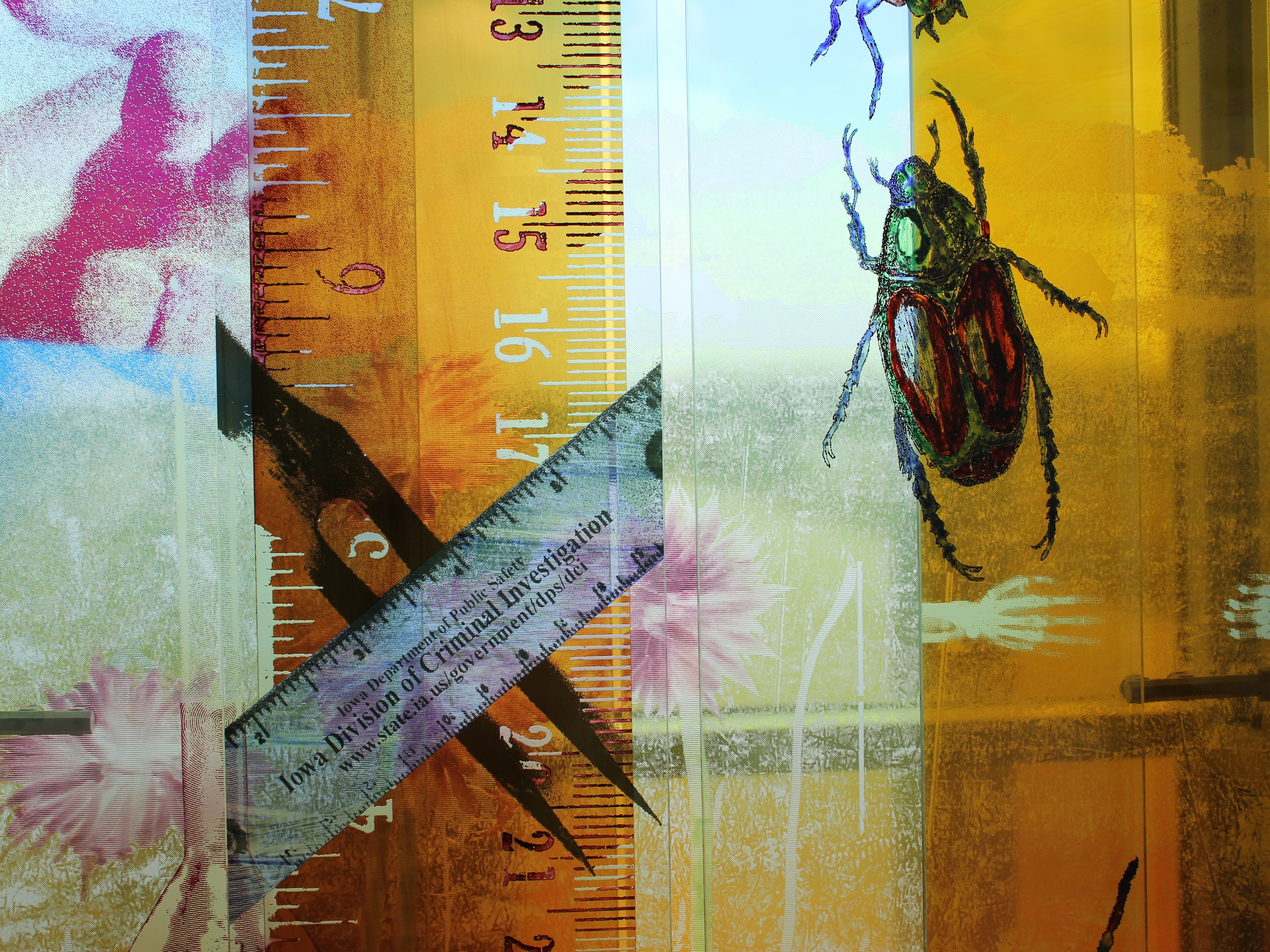 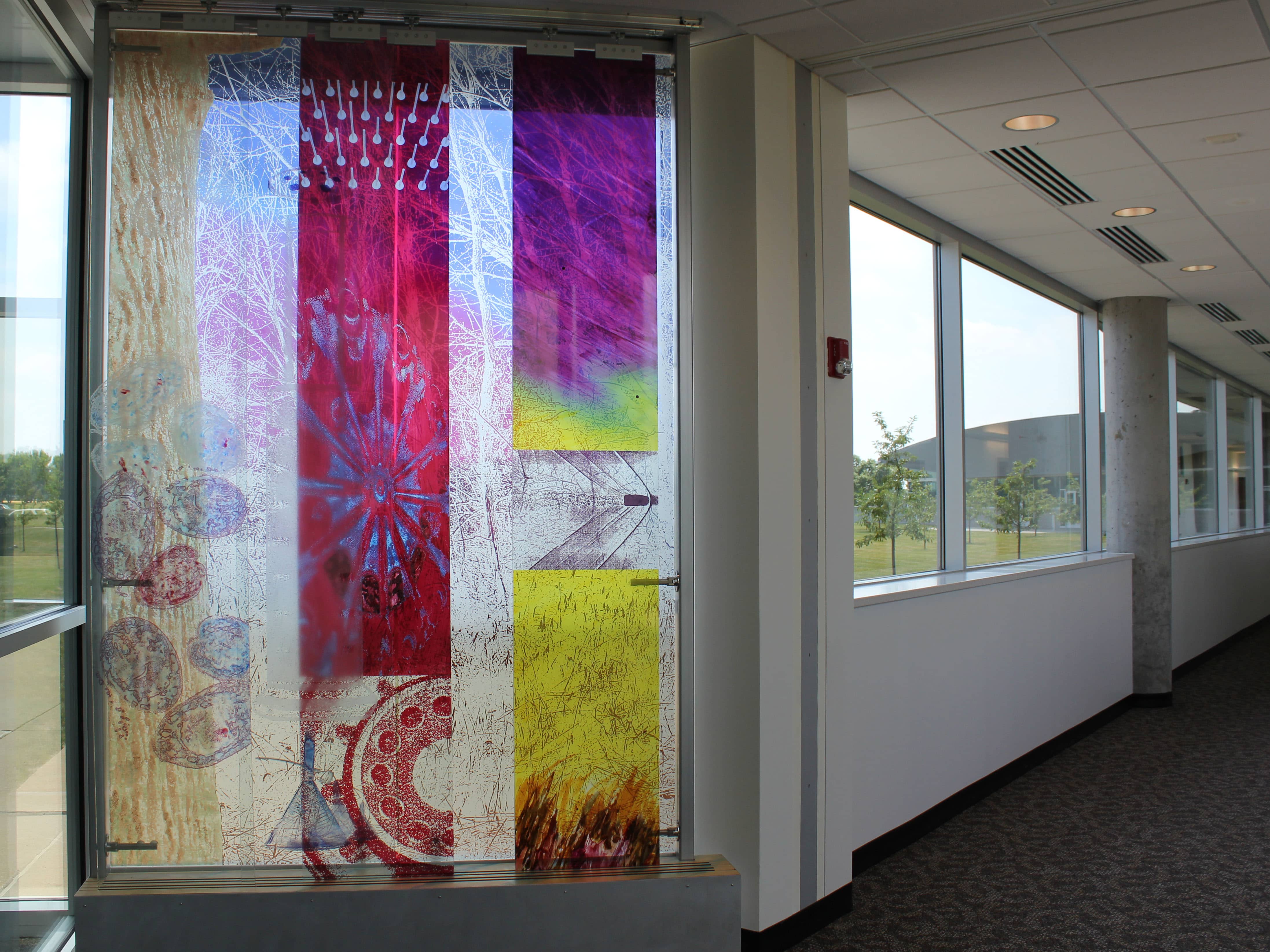 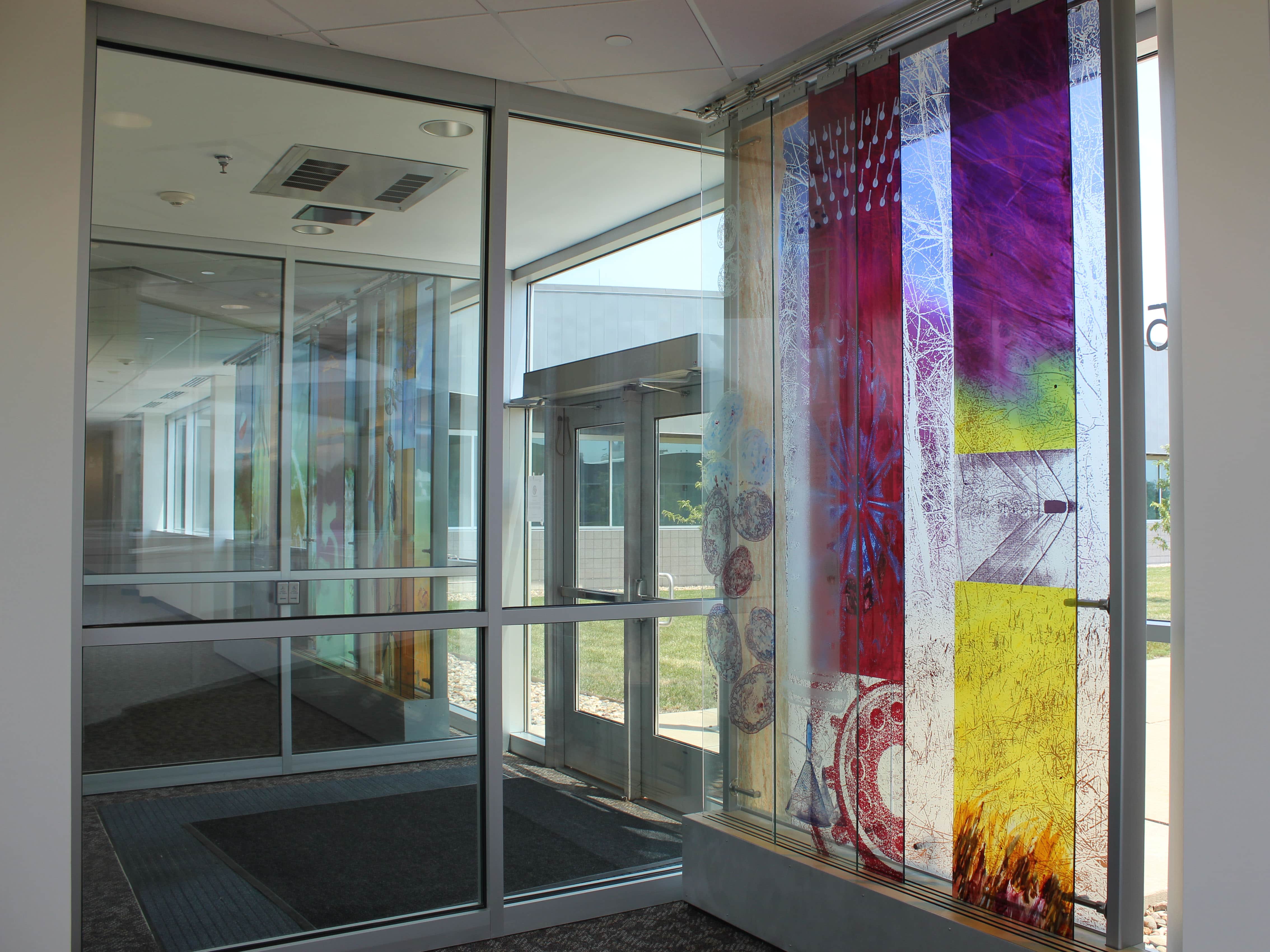