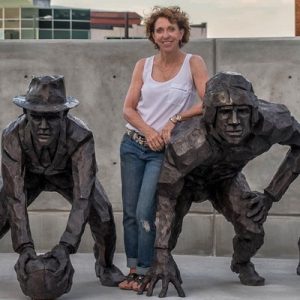 RAGBRAI is an acronym and registered trademark for the Register’s Annual Great Bicycle Ride Across Iowa, which is a non-competitive bicycle ride organized by The Des Moines Register and going from west to east across the U.S. state of Iowa, that draws recreational riders from across the United States and many foreign countries. First held in 1973, RAGBRAI is the largest bike-touring event in the world.

The Register is Iowa’s largest and most influential newspaper and RAGBRAI has become a Register tradition. The Register’s sponsorship of RAGBRAI – began in 1973 when writer John Karras challenged columnist Donald Kaul to do a border-to-border bicycle ride across Iowa.

John Karras (born 1930), an avid bicyclist, is a former feature writer/copy editor for the Des Moines Register. Karras suggested to Kaul that he ride his bicycle across Iowa and write columns about what he saw from that perspective. Karras made up the name, with its unwieldy acronym as something of a joke. “RAGBRAI”, that is. There from the start, in 1973, a co-host up to the present and Karras has been a participant in most of the rides.

Donald Kaul (December 25, 1934 – July 22, 2018), also an accomplished rider, is an American journalist and pundit, and was nominated for the Pulitzer Prize for Commentary in 1987 and 1999. Kaul retired after three decades writing opinion columns, mainly for the Des Moines Register, where he established his liberal and satirical style.

I sculpt to achieve a visceral response. My core purpose is to inspire, teach and heal through art. We can feel and immerse ourselves in an experience simply through what our eyes experience. Victory, laughter, camaraderie, glory, defeat, the pain of loss, or celebration of life are energies I breathe into and instill in my art. I want to share a passion and experience in a way that affects everyone. I engage imaginations.

The work presented here illustrates my ability to communicate ideas, capture the essence of a moment and provoke mental dialog. There has been no more profound sensation of success than the response from people who have sought me out to express how my art has resonated with them and why. I am known for powerful and moving monumental imagery. I am an athlete and an artist moved by all that is human in body and spirit. To have the opportunity to create for the already very rich Des Moines public art collection would be a coveted experience.