The Pipes of Pan
Photo Courtesy of  Jon Turner 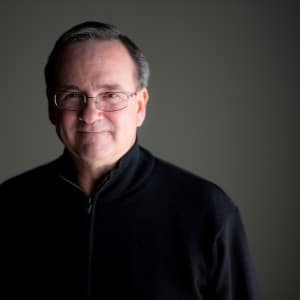 The Pipes of Pan

Made of welded CorTen steel (corrosion resistant steel) and malleable iron, The Pipes of Pan measures 282 inches (23 feet, 6 inches) high and 22 inches in diameter.  It was commissioned in 1992 for one of the first interactive science centers in the world—the Science Center of Iowa. This outdoor public installation was created for the Science Center’s original site in Greenwood Park.  Featured are a large scale group of musical instruments: flutes or pipes. The Pipes of Pan is based on the principle of the closed tube, consisting of multiple pipes of gradually increasing length (and occasionally girth). They are considered to be the first mouth organ, ancestor of both the pipe organ and the harmonica.

The project is in memory of Bryant Knapp Ely. In 1990, two-year old Bryant tragically died in a swimming pool accident. He was the son of Science Center patrons Bennett and Leisa Ely.

The Pipes of Pan sculpture was fabricated and installed the Summer of 1992. The project was privately dedicated on 1 August 1 1992, with family, museum representatives, and local dignitaries present. The public dedication was held on 4 August 1992. 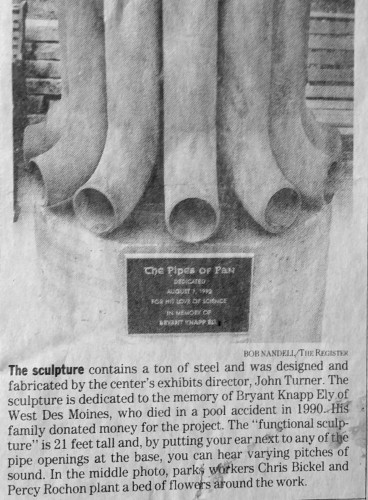 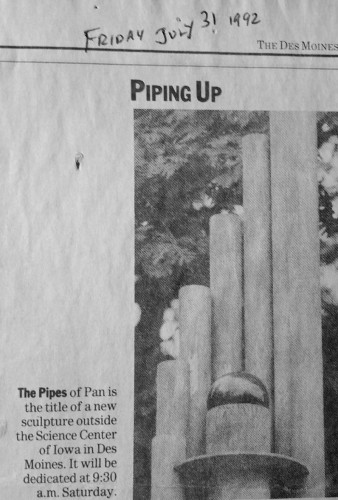 The Pipes of Pan was developed as the primary object in a larger group of elements that comprised an interactive outdoor “Physics Playground” at the Greenwood Park location. The other interactive elements no longer exist.

It was relocated to its current location near the reflecting pool on the south side of the current Science Center of Iowa when the institution moved out of Greenwood Park in 2005.

No wind instrument is more ancient and none more widespread than the pan pipes.

[I was commissioned to create] a site specific functional sculpture, one that would primarily demonstrate a scientific principal first and foremost. It was the focal piece of [my] larger 7-piece functional sculpture collection entitled "Physics Playground" ­(1994.) This object forces us to look skyward for the answers to its functionality, up to the heavens where a curious child we all have known, looks down from above.

"The Pipes of Pan" primary functionality comes from its static ability to gather, separate, and amplify unique wavelengths and distinct sounds from its sonic environment in each of the 12 different length tubes. Unusual sounds are revealed by listening to the subtle differences at the ends of each of the tubules. Each one separates sound differently. You might hear an airplane flying above in one; but not its neighboring one. It also can be actively played as an instrument by clapping near the opening of each tubule, or by slapping the ends of the tubes in any number of ways that range through the 12 different notes or tones available. Play a song, change your own sound environment!