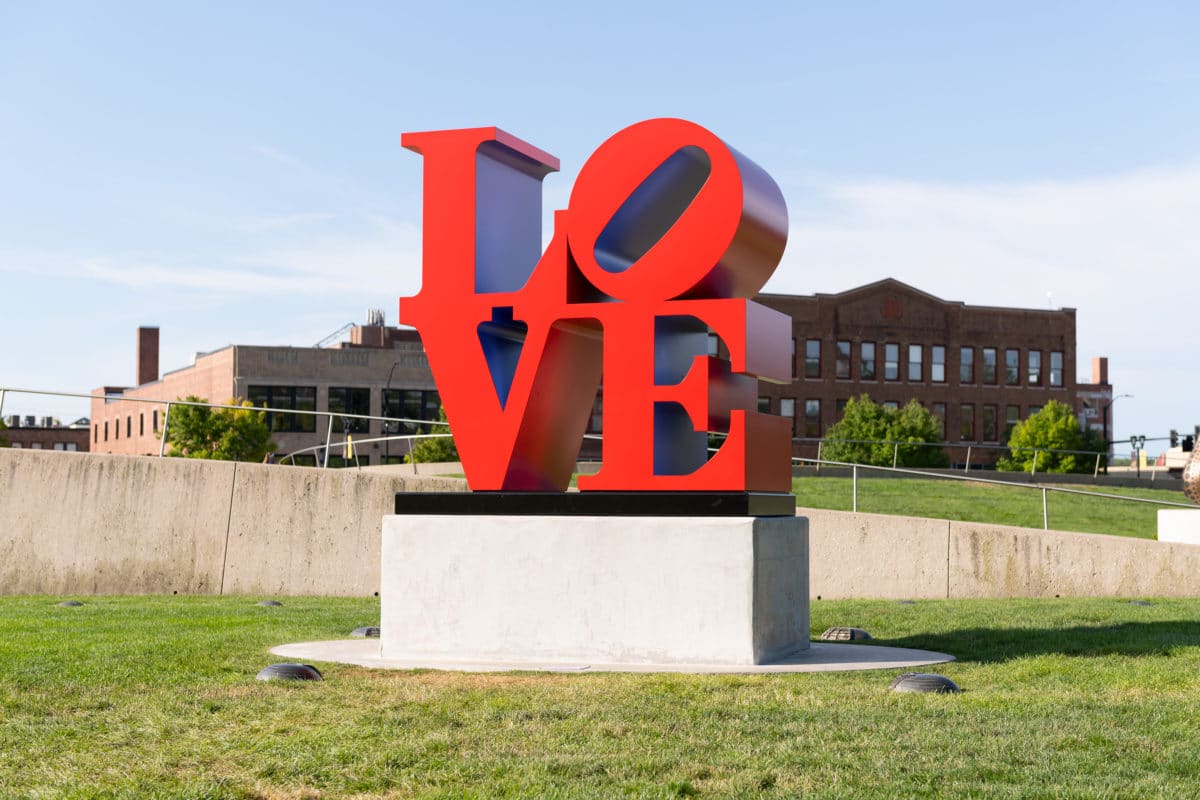 The word Love in upper-case letters, arranged in a square with a tilted letter “O”.

Beginning in 1964, Indiana began to create images and objects using the word LOVE. Indiana maintained that a single word could be a viable subject of art by harnessing its emotional charge and the power of language.

With the universality of the word and subject in mind, the Museum of Modern Art selected his image of LOVE as its Christmas card in 1965, and the US Postal Service created a stamp with the image in 1973. It was quickly adopted by the “love generation” and enjoyed mass appeal, which continues today.

Other works in the edition of this particular format and colors are in the collections of the San Francisco Museum of Modern Art and Tate Modern in London. Many museums around the world, including the Art Institute of Chicago, the Brooklyn Museum, the Hirshhorn Museum and Sculpture Garden, Los Angeles County Museum of Art, the Metropolitan Museum of Art, Museum of Modern Art, National Gallery of Art, and the Whitney Museum of American Art, among others, hold additional works by the artist.

Many versions of Robert Indiana’s Love sculpture that exist worldwide (1969–1999). Here is the list.

The first rendering of it in sculpture was made in 1970. Sculptural versions now appear in urban centers around the globe. Variants employ the Hebrew, Chinese, Italian and Spanish languages, as well as the original English language.

“Here the quartered field is filled with the four letters of love, as compactly and economically as possible, but with my interest in the circle still called to mind by the tilted ‘o’."

It all started with my being exposed to Christian Science as a child. At one time I was even a member of the Church. “Love” is the key word—it’s the only word that ever appears in a Christian Science church. No crucifixes, no baby Jesuses, no saints. Nothing except one word: “L-O-V-E." ... [The original color scheme for LOVE] came from a Phillips 66 gasoline company sign in Indianapolis." (Excerpt from a 2013 interview with Susan Elizabeth Ryan, art historian and biographer, "Robert Indiana: Figures of Speech.")