Water plays a critical role in a community’s quality of life, from public health and safety to recreation and beauty. Knowing what a watershed is and how we can each play a role in preserving its function and value is important but rarely understood. The West Des Moines Public Arts Advisory Commission use this public art initiative to raise awareness of watersheds and everyday actions which residents and businesses can take to improve water quality in a watershed.

Every person who participates in and experiences Even Water can be enlightened, empowered, and proud to live in West Des Moines. Even Water is an eight-piece cycle suite of permanent sculptures installed in Raccoon River Park in 2019. It is fabricated in mirror polished stainless steel and bronze. 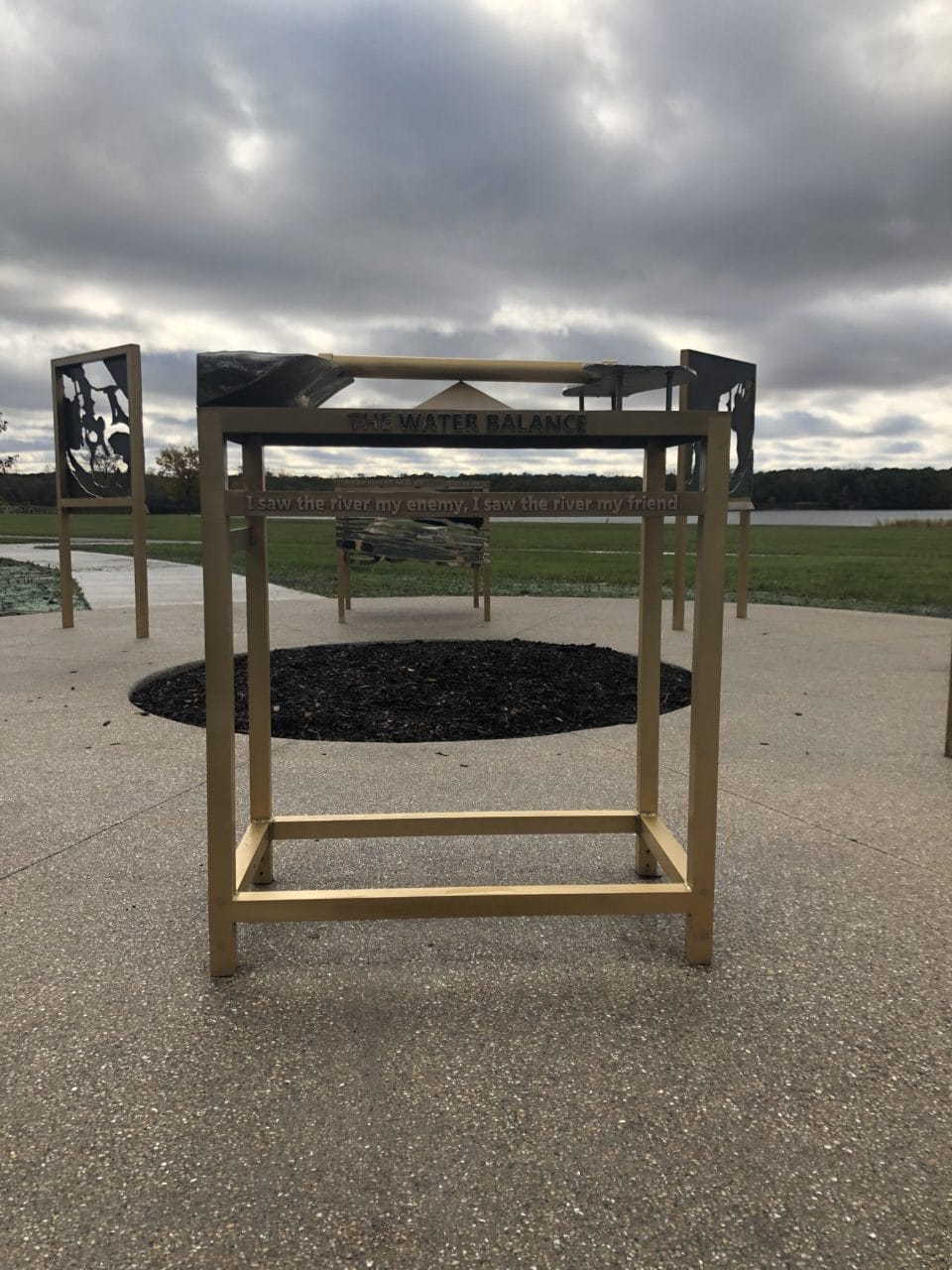 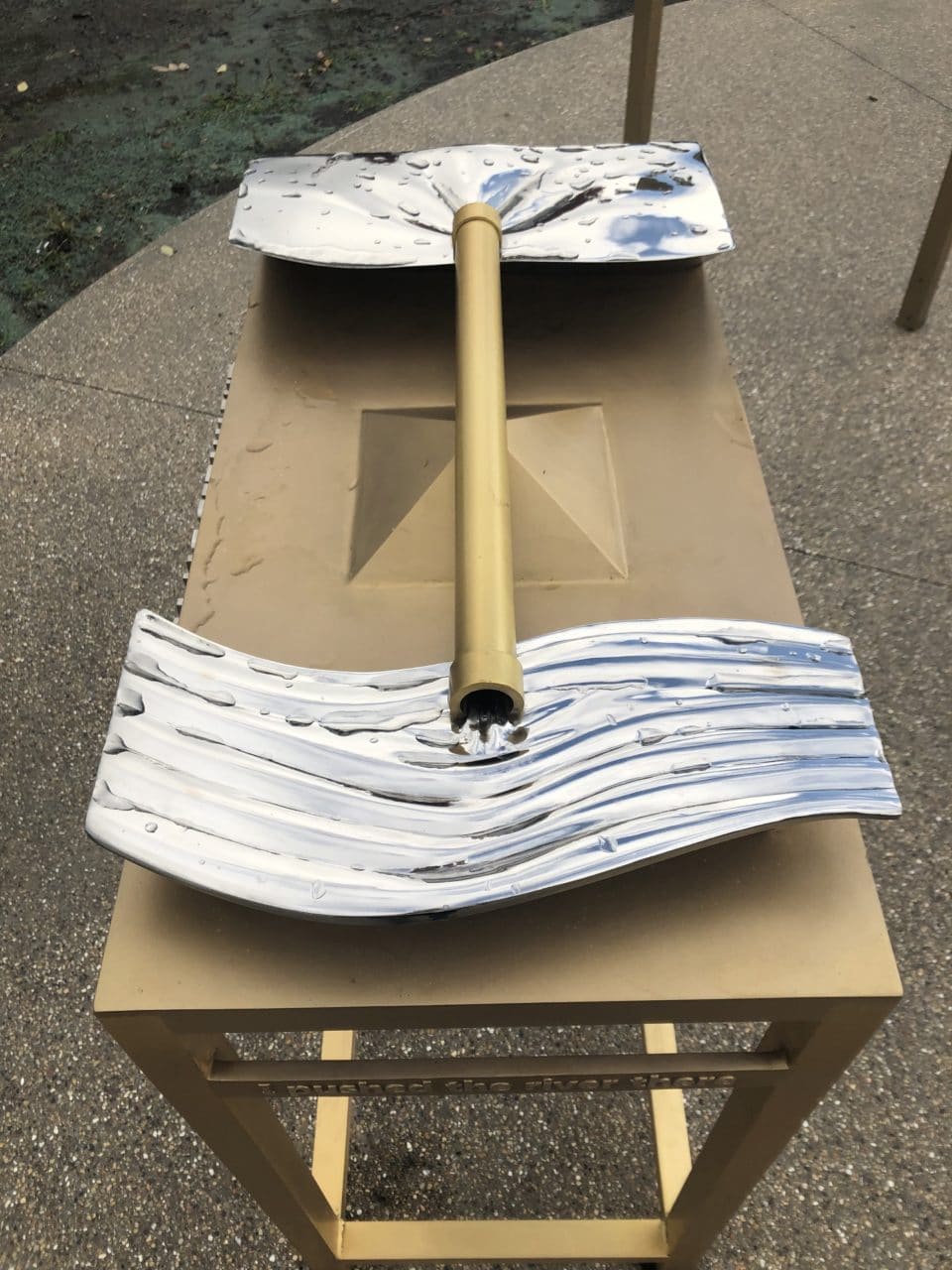 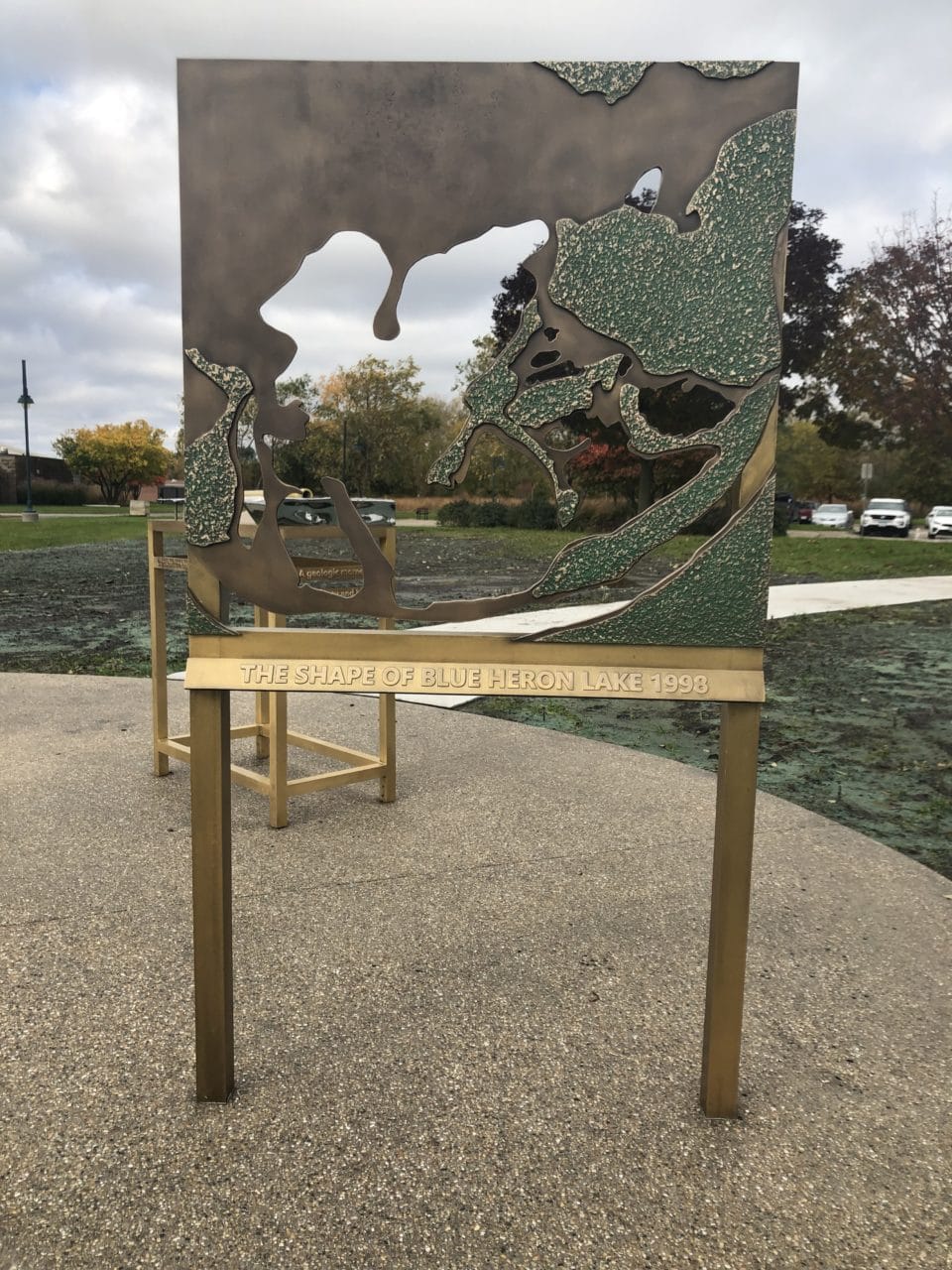 Four poetic sculptures are: A Changing Lake, The Water Table, The Oxbow, The Well, and The Water Balance.

EVEN WATER: A Changing Lake

A Changing Lake is a sculpture of four frames that asks the viewer to perceive the constant change brought about by people and the landscape. Blue Heron Lake is not a geologically formed lake, but the result of a quarrying operation begun in 1955. A Changing Lake chronicles the decades of the 1950s, 1960s, 1970s, and 1980s. During these decades the confluence of the quarrying operation and rising and falling of the Raccoon River brought the Lake and the River together in an unrelenting dance. The quarry unearthed five springs which filled the cavity left by the River to flow into and join the Lake. At its early elevations and at high water the River and Lake became one. Reclamation of the landscape as a park, again separated the flow of the River from the Lake. A Changing Lake is comprised of four bronze picture planes in which the River and Lake are seen as open windows to the other sculptures in Even Water and the landscape beyond. Through these “windows” viewers can see that Blue Heron Lake was not part of the landscape 60 years ago. Its arrival through human intervention was recent compared to the long history of the land. The 3-dimensional map of the site, or picture through a window that outlines the changing shape of the lake, was inspired by aerial photos of 1955, 1967, 1974, and 1990.

EVEN WATER: The Water Balance

The form or process of engineering that makes the 2019 equilibrium of the site possible in described in the sculpture, The Water Balance. This sculpture is a metaphor for the pervasive concept of people engineering water on the land. Throughout time people have changed the course of water to cohabit the land. This has been done by re-channeling of rivers, diverting water for roads and land use, creating lakes and reservoirs, under-grounding rivers and streams. The engineering of the flow of the Raccoon River and creation of a dike between the River and the Lake separated the cleaner water of Blue Heron Lake fed by underground springs and the water of Raccoon River, sullied by continual agricultural runoff. In the natural topography of the site, the River is approximately two and one-half feet lower that the level of the Lake. Three engineered pipes, very much like a balance scale redistribute the water from the Lake back into the River. This continues until the lake and River reach an equilibrium again awaiting the next flood in the water cycle. Because the River is lower than the Lake, the Lake will drain into the River until it is below the level of the pipe and cannot drain any more. There is a slight downward slop of the pipe to encourage the water to move toward the River. The bronze and stainless-steel sculpture, The Water Balance, examines this relationship represented by a pipe which is like a balance bean resting precariously on the tip of a pyramid , balancing the flow of Lake water back into the River until the two systems reach equilibrium once more.

EVEN WATER: The Oxbow

The Oxbow is a slice of the River turned on edge to illustrate the form of a meandering River through the landscape. The sculpture is two steel sections of the Raccoon River, placed back-to-back, the original form of the Oxbow from 1955 aerial photographs and the straightened engineered form of the River from aerial photos taken in 1998.

An oxbow lake is a U-shaped body of water that forms when a wider meander from the main stem of a river is cut off, creating a free-standing body of water. This landform is so named for its distinctive curved shape, resembling the bow pin of an oxbow. Though the form in the “Oxbow” sculpture represents a classic oxbow shape of a river, in this case rather than creating a separate body of water from the River, the River and the space of the oxbow have been absorbed by the Lake. With civil engineering, the Raccoon River still runs free around Blue Heron Lake. The River is always moving and slightly changing its course. The oxbow in the River seasonally joins the Lake during peak periods of flow.

EVEN WATER: The Water Table

The Water Table is a bronze table-like form whose top surface is in the shape of Blue Heron Lake in the decade of 2011-2020. The shape of this lake is what most residents and visitors of West Des Moines probably understand as a “natural lake”, when in reality it is a lake whose form has been determined not only by natural forces, but by manipulation and engineering of the landscape that have brought the Lake into equilibrium with the River. At most the Lake is only 30-feet-deep, a depth set by the depth of the quarrying operation that formed its bottom. The depth has been magnified in the sculpture in order to create the thickness of the sculpture. The bronze sculpture depicts the lake and five small extensions that reach downward into the bedrock of the landscape. The five bronze extensions represent springs, fingers of the water table or aquifer below the Lake. In real life these provide  a yearly flow of cold water through separations or cracks in the bedrock. This prevents the water from warming and creating the algae blooms that clog so many other lakes which do not have a supply of cold water to prevent its growth.

The story of water in Iowa and on this particular site is much deeper. Hundreds of feet below the surface are a series of aquifers, like the layers of icing in a cake. These aquifers are underground rivers that sometimes surface as springs. As climate change warms the earth our population seeks clean water, many aquifers have been depleted of their supply of water. There are eight wells houses on the site that take water from the water table below Raccoon River Park.

EVEN WATER: The Well

The Well sculpture diagrams the ‘tapping’ of the water table for potable water. After drilling, the piping extends down to the bedrock where the water table rests. The eight small well houses located  located near Raccoon River Park’s playing fields are equipped with piping extending into the earth. These wells are used to bring water into West Des Moines’s water system.

The  sculpture, Even Water, takes advantage of chronicling the use and movement of water throughout the Park, by selecting four major processes that are constantly influencing the Park and the greater Des Moines landscape. The events become moments rendered in bronze and mirrored polished stainless steel that are poetic interpretations of the natural course of water and its engineered systems in the landscape.  The sculptures and poetry are a kind of rebus that must be experiential sum to the artwork. The sculptures define forms and processes that allow water to determined the landscape  form and landscape process of Raccoon River Park. They are both natural and engineered structures. The combination of the "natural" and the man made hold the meaning and poetic resonance for peoples understanding of Raccoon River Park. The essential discovery is the confluence of engineering and landscape process. We thought we could determine nature and now we have.