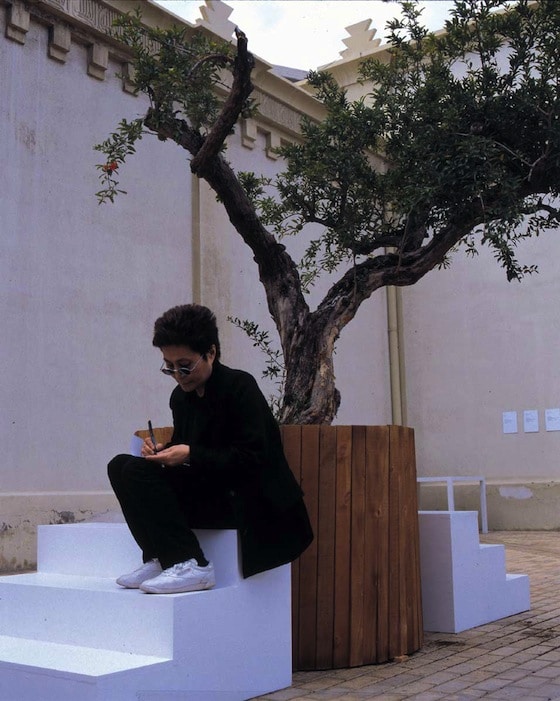 
The project called ‘Our Beautiful Daughters’ will be spread across multiple spaces beginning January 13 at two locations of the in the capital City of India: New Delhi.

VAG is a contemporary art space that has helped to pave the way for collaborations between private and public art sectors in India. In 2007, VAG held a highly acclaimed exhibition of Lucian Freud and Francis Bacon along with Tyeb Mehta and FN Souza in New Delhi. VAG operates in six locations in New Delhi and London, England.

About the artist:
Yoko Ono (American, born 1933, Japan) is a descendant of an Emperor of Japan. Her family’s business was banking and as a child lived in New York City. In 1945, her family was in Tokyo during the great fire-bombing. They were sheltered, but after the bombing her family found themselves begging for food while pulling their belongings in a wheelbarrow; and it was during this period in her life that Ono says she developed her assertive attitude and understanding of “outsider” status when children taunted her and her brother, who were once well-to-do. Her father was taken to a prisoner of war camp in China. Her family moved to Scarsdale, New York after WWII. She attended Sarah Lawrence College and was drawn into the New York art world. In 1956, she married composer Toshi Ichiyansgi and, after living apart for several years, they divorced in 1962 to marry jazz musician Anthony Cox; they had a daughter, Kyoko, in 1963. Her marriage to Cox ended with a bitter legal battle for custody of their daughter. In 1971, Cox disappeared with 8-year-old Kyoto; Ono was reunited with her daughter 23 years later.

In the 1960s, Yoko Ono was associated with Fluxus, an avant-garde art group. The musician John Cage was one of the most important influences on her performances. Her long list of friends included Merce Cunningham, Peggy Guggenheim, Keith Haring, and Andy Warhol. During this time Ono explored conceptual and performance art. Her book “Grapefruit” was published several times, initially in 1964, widely distributed by Simon and Schuster in 1971, and reprinted by them again in 2000. The performance pieces throughout her career have formed the basis of her exhibitions, including one famous show at the Everson Museum of Art in Syracuse, New York called “This is Not Here.”

In 2001, YES YOKO ONO, a 40-year retrospective of Ono’s work, received the highest accolades in the museum profession. In 2002, Ono was awarded the Skowhegan Medal for work in assorted media. In 2005, she received a lifetime achievement award from the JapanSociety of New York. In 2008, she showed a large retrospective exhibition, “Between The Sky And My Head,” at the Kunsthalle in Bielefeld, Germany, and the Baltic Center of Contemporary Art in Gateshead, UK. In 2009, she showed a selection of new and old work as part of her show “Anton’s Memory” in Venice, Italy. She also received a Golden Lion Award for lifetime achievement from the Venice Biennale in 2009. In July 2011, Ono was awarded the 8th Hiroshima Art Prize for her contributions in art and for peace.