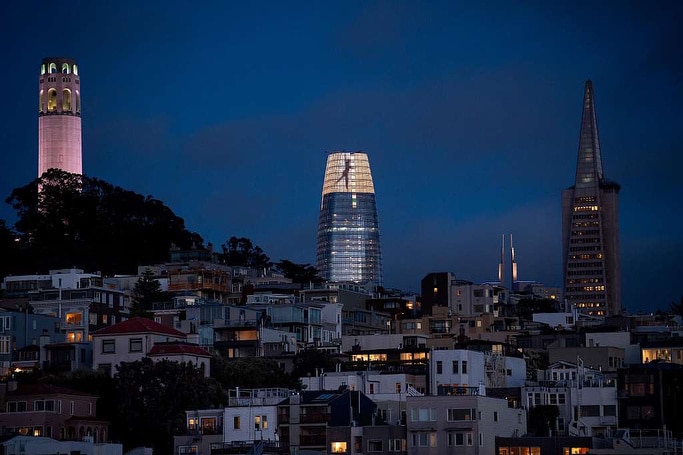 Recently, The New York Times reported that the Salesforce Tower, the second tallest building west of the Mississippi, has taken the concept of public art to new heights in San Francisco.

Since May 22,2018, 11,000 LEDs projected an ever-changing visual display on the six-story crown of the building. The screen is fed in part by cameras around the city that survey the bay, the weather and activity in a local park.

Jim Campbell, the artist in charge, calls it “Day for Night.” As the city winds down for the evening, it will catch a glimpse of where it has been.

The images are “very abstract — clouds, ocean waves,” Campbell said. “I don’t like street scenes much because they have the feel of a security camera.” But he’s also experimenting with prerecorded images, including dancers from Alonzo King Lines Ballet, a local company.

“A typical model for public art is that you deal with the surroundings — the community and the environment,” Campbell said. “That has to be thrown away here. You can’t even see ‘Day for Night’ from the immediate surroundings. The skyline is the context.”

Campbell, a longtime San Francisco resident, studied mathematics and engineering at MIT. He became a filmmaker and in the mid-1980s started doing interactive video installations. “Day for Night” is a nod to the 1973 Francois Truffaut movie, whose title refers to a process for shooting night scenes during daylight.