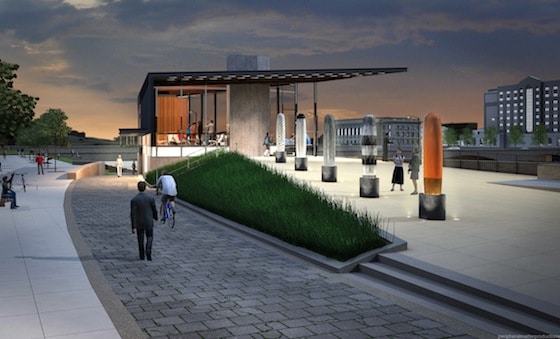 Des Moines, IA: The Jim and Helen Hubbell Charitable Foundation has contributed $200,000 to the Greater Des Moines Public Art Foundation to support a public art project at the Hub Spot, a new pavilion and plaza being developed along the Downtown Des Moines Principal Riverwalk. The funds will be used specifically for five large scale sculptures called “Dangos” by Jun Kaneko. The sculptures will be installed September 2012.

“We are pleased to support the Greater Des Moines Public Art Foundation with this gift,” said Helen Hubbell. “The unique Dango sculptures will add significantly to the experience of the Hub Spot, as well as to the Riverwalk and entire Des Moines area.”

The Public Art Foundation supports placing art in public spaces within the community through public and private collaborations. It is dedicated to envisioning, developing, advancing, and promoting public art projects.

“The generous contribution from the Jim and Helen Hubbell Charitable Foundation reflects the importance of public art in our community,” said Paul Mankins, Public Art Foundation Board President. “The gift allows us to place Kaneko’s Dango sculptures as well as move us closer to our goal of becoming a world-class destination for public art.”

Kaneko’s trademark Dangos are hand built, ceramic ovular sculptures resembling vases without openings and were carefully selected for Hub Spot by the artist. The Dangos will be about seven feet high and covered in Kaneko’s signature geometric patterns. According to Kaneko, the Dangos will “enliven their surroundings and shake the air.”

ABOUT THE GREATER DES MOINES PUBLIC ART FOUNDATION
The Greater Des Moines Public Art Foundation, established in 2004, recognizes that art belongs not just in galleries and museums, but in streetscapes, parks, buildings and infrastructures of a thriving community. Dedicated to envisioning, developing, advancing and promoting public art projects, the Public Art Foundation collaborates with local entities and artists to engage, inspire and enrich the lives of residents and visitors to the community. The goal is to increase awareness of our community as a world-class destination for public art.

ABOUT THE ARTIST
Jun Kaneko, born in Nagoya, Japan in 1942, has consistently followed his own path and continually experimented with the technical aspects of the ceramic medium. Kaneko has taught at various U.S. art schools, including Scripps College, Cranbrook Academy of Art and Rhode Island School of Design. Kaneko established his third studio in Omaha, Nebraska, in 1990 where he primarily works. He has also created work in several experimental studios including European Ceramic Work Center, Otsuka Omi Ceramic Company, Fabric Workshop, Bullseye Glass and A.S.A.P. His prolific roster of diverse work appears in numerous international solo and group exhibitions annually. He designed the sets and costumes for the Opera Omaha’s spring 2006 performance of Giacomo Puccini’s “Madam Butterfly.” His work is included in more than 60 museum collections including the Hawaii State Art Museum, the Honolulu Academy of Arts, the Museum of Nebraska Art, Scripps College, and the Smithsonian American Art Museum. He has realized over 25 public art commissions around the world. He has been honored with national, state and organization fellowships and an honorary doctorate from the Royal College of Art in London.