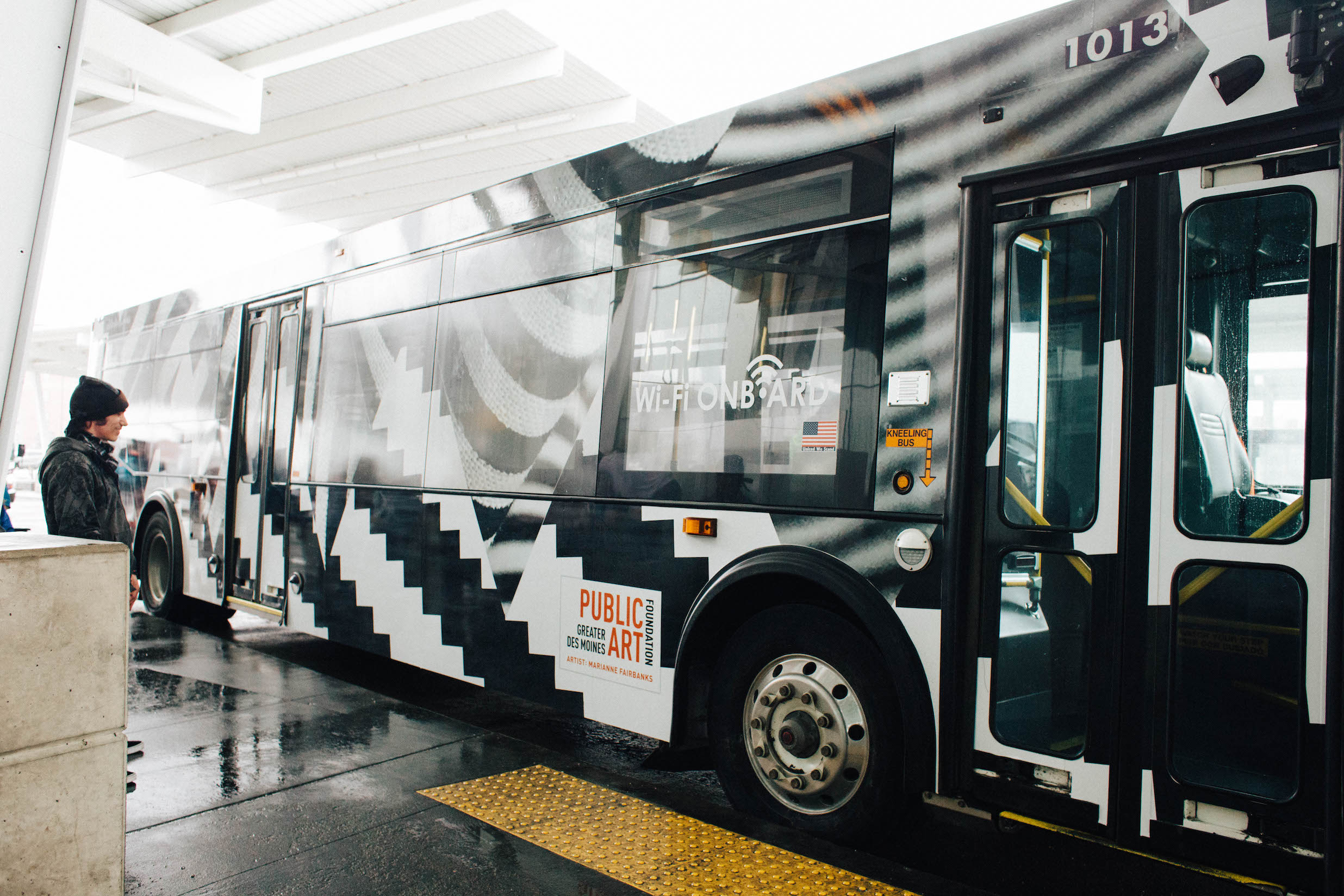 The Public Art Foundation also commissioned performing artists and dancers to celebrate the reveal of the new art bus with a flash mob at DART Central Station. Hip-hop artist MarKaus (aka Marquas Ashworth) orchestrated the event and debuted his new single, “Move”. Staff and board members from DART and the Greater Des Moines Public Art Foundation joined waiting bus riders, dancers and artists at the unveiling.

“We were excited to think outside-the-box on this special unveiling of the ninth art bus in the series,” said M. Jessica Rowe, director of the Greater Des Moines Public Art Foundation. “We were also able to share a special artistic experience with DART young riders by unveiling the artist’s design with a flash mob. Special thanks to the MarKaus, the professional DJs who helped shape the music, as well as the dancers directed by Jordan Gregory who choreographed on their incredible performance.”

Much of Fairbanks’ recent work focuses on the intersections of weaving, mathematics, and technology. These themes can be found in her design for the art bus, as Fairbanks elaborates, “My work pays homage to sophisticated textile traditions including age-old indigenous processes in form-making and domestic hand-spun textile production. It is equally informed by the Platonic geometry used in architectural forms and sculptures pioneered by American architect Buckminster Fuller. Mathematics is at the heart of these systems of logic – both pliable textiles and Platonic solids – and serves as the springboard for bold, material-based explorations. Between the inflated scale and bold patterns this work destabilizes conventional gender based value systems of hard and soft form-making, and encourages a deep engagement with our material world.”

Marianne Fairbanks is an assistant professor in the Design Studies department at the University of Wisconsin – Madison.  She received her MFA from the School of the Art Institute of Chicago and her BFA from the University of Michigan (BFA). Her work has been shown nationally and internationally in venues including The Museum of Art and Design, NY, The Museum of Contemporary Art in Chicago, The Smart Museum of Art, Chicago, and Museum London, Ontario.  Fairbanks is a founding member of Mess Hall, an experimental cultural space in Chicago, and co-founder of Noon Solar, a small business that made wearable solar technology to charge personal electronics.

The bus wrap project began with an open call, which generated a response from artists across 21 states. A team of art professionals reviewed more than 325 images and finalists were commissioned to create concept proposals. This is the ninth in a series of DART buses that have been wrapped with unique and innovative compositions. Previous art buses included designs by artists Alex Brown (November 2014), Jay Vigon (June 2015), Susan Chrysler White (March 2016), Larassa Kabel (June 2016), Brent Holland (October 2016), Jordan Weber (June 2017), Benjamin Gardner (December 2017) and Nick Goettling (June 2018).

The Greater Des Moines Public Art Foundation, established in 2004, recognizes that art belongs not just in galleries and museums, but also in streetscapes, parks, buildings and infrastructures of a thriving community. Dedicated to envisioning, developing, advancing and promoting public art projects, the Public Art Foundation collaborates with local entities and artists to engage, inspire and enrich the lives of residents and visitors to the community. The goal is to increase awareness of our community as a world-class destination for public art. For more information about the Public Art Foundation, visit www.dsmpublicartfoundation.org.

The Des Moines Area Regional Transit Authority (DART) is the public transportation provider in and around Polk County. DART operates a family of transportation services that connects thousands of people every day to jobs, school, medical appointments, entertainment and more. For more information about DART services, schedules, route changes, or directions to the nearest DART stop, visit the website at ridedart.com or call 515-283-8100.