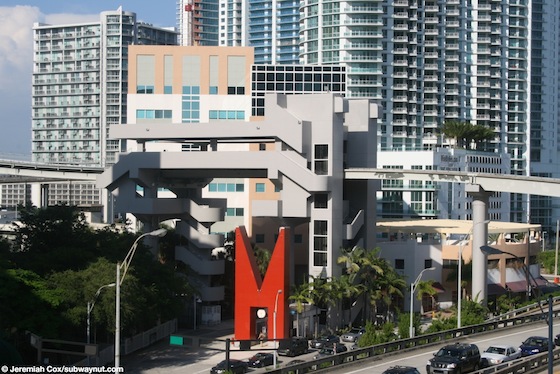 Designed as an entranceway to the Riverwalk Station in Miami, Florida, the “Red M” creates an intimate scale within the station’s lofty eight-story structure. According to the artists’ concept of the piece, “The ‘M’ stands for Miami, Magic, Metro, Mover and as a landmark in a land of immigrants that may also celebrate motherhood and memory and hence the birth of the first Pan American city under construction. In this regard the ‘M’ is a model of multiple meanings, the secret of which remains a mystery.”

Designed as an entranceway to the station, “Red M” creates an intimate scale within the station’s lofty eight story structure. Located in front of the turnstiles on the east side of Riverwalk Station, the artwork refers historically to subway and other transit entrances with decorative elements, such as clock and lighting. The bright red color adds interest and excitement to the site.

Behar & Marquardt, who collaborate under the name R&R Studios, are known for their large-scale permanent public installations. Originally from Argentina, they both have degrees in Architecture from the Universidad Nacional de Rosario. They have exhibited their work at the Museum of Contemporary Art in North Miami, the Fondation pour l’Architecture in Brussels and the Museo Nacional d’Arte in La Paz. Their work has been featured in numerous publications including The New York Times, Aula, Art in America, and Metropolis.

What makes good public art?
"All We Need is Love"