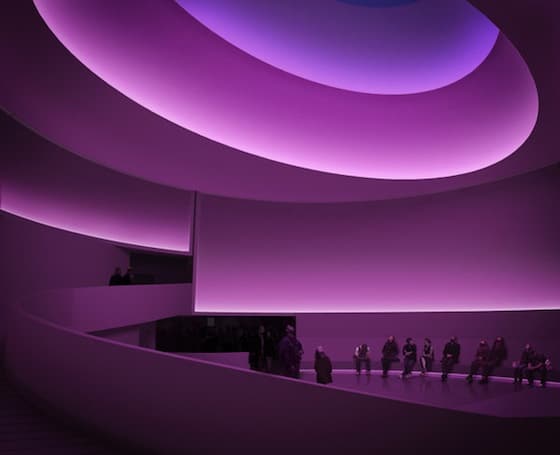 James Turrell is “the first artist who really stated unequivocally that you can liberate light from its source and make it the artwork,” said Alison de Lima Greene, curator of contemporary art at the Museum of Fine Arts, Houston, TX. Houston’s museum is joining with the Los Angeles County Museum of Art and the Guggenheim Museum in New York in coordinated, successive Turrell exhibitions beginning in May 2013, offering an unusual opportunity to experience his immersive light environments that allow viewers to “see ourselves see,” as he puts it.

Recognizing the challenge of accommodating Turrell’s expansive vision within the confines of a single museum, the organizers passed over the standard model of a single traveling retrospective in favor of this collaboration of complementary exhibitions. The LA County Museum’s exhibition opens May 26 and runs through April 6, 2014; it is the largest of the three, with 40 works spanning the artist’s career.

The trick of the piece is to set up a kind of anti-architecture that allows you to feel the light and space. “You normally look across the ramps and don’t think about this volume that is the center of the museum,” said Nat Trotman, who organized the Guggenheim show with Carmen Gimenez. “That is crystallized and solidified. It’s really about a dialogue between [architect and artist] Wright and Turrell.”

Turrell has site-specific installations in 25 countries, has more typically worked outside major cities. His most ambitious and continuing project is at Roden Crater in the Arizona desert, which he found in 1974 after seven months of canvassing western America in his miniplane in search of an extinct volcanic crater. There, over the last four decades, he has designed and excavated a multi-chambered, naked-eye observatory where visitors can perceive astronomical phenomena from the vantage points he has created.