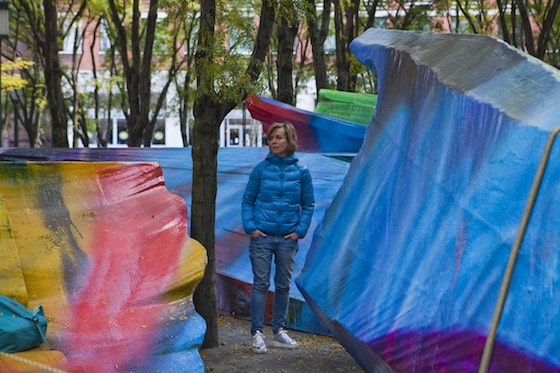 A new sprawling and spectacular public art by German artist Katharina Grosse in Downtown Brooklyn’s MetroTech Center is the first New York destination to host the artist’s otherworldly spin on street art: the temporary project called “Katharina Grosse: Just Two of Us” will be on view through 14 September 2014.


This project, like most of Grosse’s large-scale installations, incorporates massive sculptural features that allude simultaneously to an imaginative vista. The artist’s primary means of expression is painting, and the thrust of the work is rigorously abstract. Over the past decade, she has developed a unique working method and a singular approach to painting that has taken the medium far beyond its traditional domain.

Grosse’s rather novel practice has been compared to graffiti and street art. Typically she designs intricate but ramshackle constructions using mounds of dirt, found objects and fabricated abstract shapes in wood, Styrofoam or plastic. Once the construction is in place, she dons protective gear that resembles a hazmat suit and wields an industrial spray gun. She moves through the environment—usually on foot, but sometimes on scaffolding or suspended from a crane—covering almost everything in her path with brilliant, saturated color.