Upon completion in 1936, California’s San Francisco–Oakland Bay Bridge was celebrated for its beauty and engineering marvel. The bridge at eight miles long, is one of the world’s longest bridges.

Six months after it opened, however, the Golden Gate Bridge was completed nearby, eventually becoming a world-famous icon, leaving soon the Bay Bridge in its shadow. This is until entrepreneur Ben Davis, a self-proclaimed ardent fan of the Bay Bridge, came up with “a way to let it shine again.” A public lighting project was conceived that would enliven the bridge and could be seen from afar.

The installation of the ambitious project began in the Fall of 2012, after approval by authorities in August and a successful fundraising drive. Since October 2012 a team of electricians climb the suspension cables every night to install over 25,000 LED lights on the vertical cables, the highest of which go up 240 feet.

The official opening, a Grand Lighting Ceremony, is scheduled for March 5, 2013. The lights will stay up for at least two years, but could be extended for five years, Ben Davis said. 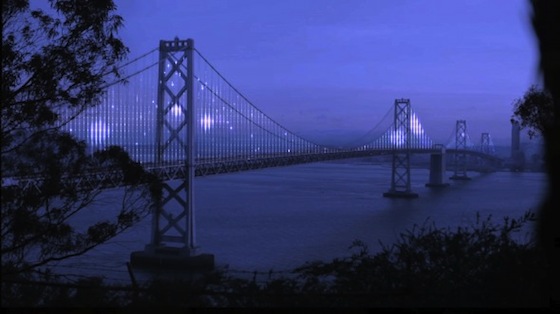 An artist rendering of “The Bay Lights” by New York-based light artist Leo Villareal. Villareal has done extensive work with sophisticated computer-generated light imagery around the world. “The Bay Lights” is an ambitious light installation on the western span of the San Francisco–Oakland Bay Bridge, scheduled to open March 2013. “The Bay Lights” will illuminate the bay from dusk to midnight and will be visible from San Francisco, but will not to drivers on the bridge. For this project, Villareal is using software that enables the creation of unique lighting patterns. Since every LED bulb can be controlled independently, he will program complex algorithms that reflect the patterns of wind, water, and the natural environment of the Bay. (Courtesy of Leo Villareal)