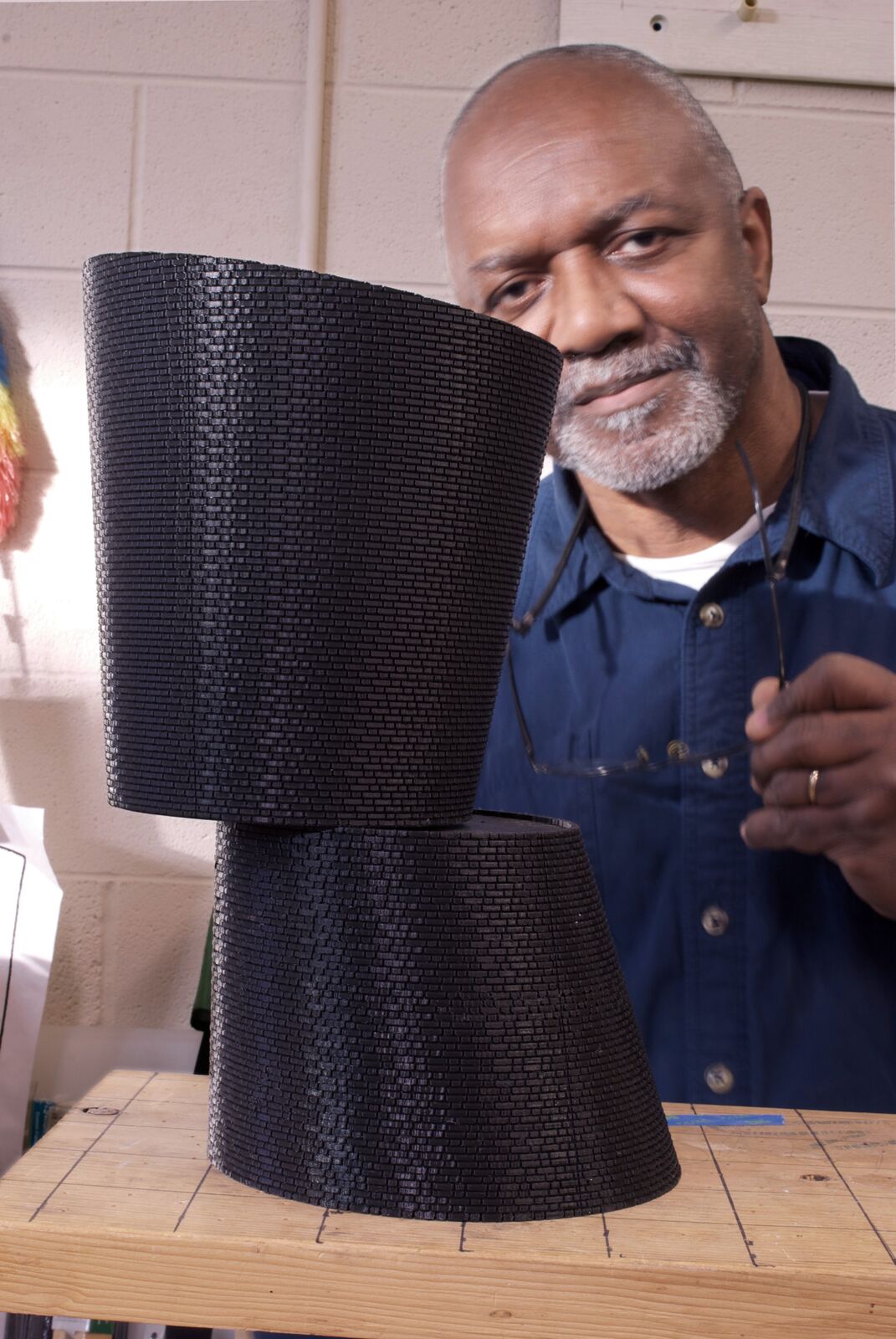 Des Moines, IA (April 4, 2018) —The Greater Des Moines Public Art Foundation is pleased to announce that Neumann Brothers, Inc. has begun the installation of “A Monumental Journey” at Hansen Triangle Park bordered by Grand and 2nd Avenues, in downtown Des Moines.  The world-class public art project, designed by acclaimed artist Kerry James Marshall, honors the legacy of African-American lawyers who founded the National Bar Association (NBA) in Des Moines, Iowa in 1925 after being denied membership in the American Bar Association. Their efforts had a profound and permanent impact on our nation at a time that excluded African-American lawyers from mainstream society and the legal profession. A Monumental Journey will memorialize this historic achievement.

The public dedication and celebration of A Monumental Journey will take place at 11:00 a.m. on July 12, 2018.  Juan Thomas, NBA President, and Arthenia Joyner, former NBA President, American politician, attorney, and civil rights activist from Florida will speak during the dedication ceremony. A public lecture with the artist Kerry James Marshall will be held later in the day at Sheslow Auditorium, Drake University at 6:00 p.m.

“Installation of A Monumental Journey is an exciting milestone for the Greater Des Moines Public Art Foundation and our central Iowa community. This piece of public art will sustain the legacy of 12 extraordinary individuals who were fully dedicated to fighting segregation and legal racism,” said  M. Jessica Rowe, director Greater Des Moines Public Art Foundation. “The project goal is to commemorate a piece of Iowa history unknown to most Iowans and will communicate a growing sense of place for activity and energy — a permanent testament to free speech, civil rights, justice and equality.”

Angela Connolly, Polk County Board of Supervisors Chairperson, said, “We can use art to convey very powerful messages to our residents and visitors.  The Polk County Board of Supervisors is proud to support A Monumental Journey to honor the significant work accomplished by this group of lawyers to fight segregation and racism and to preserve our local cultural history.”

“As a non-profit organization, our charitable contributions have helped transform the lives of many in our Central Iowa community.  We are honored to support A Monumental Journey to pay tribute the 12 brave men and women who fought segregation and founded the National Bar Association,” said Julie Stewart, director of community relations for Prairie Meadows.

The installation of A Monumental Journey may now be followed here.

ABOUT THE PUBLIC ART PROJECT

A Monumental Journey is a public art project developed to preserve the legacy of African American lawyers who, in 1925, founded and incorporated the National Bar Association, fully dedicated to civil rights, justice and equality in the legal system. The shape of African talking drums inspired the sculpture. The artist used this form to represent the notion of communication among diverse peoples and our legal system, which while not perfect and is striving to be balanced. Constructed of Manganese Black brick, the public art project will stand approximately 30 feet high.

Kerry James Marshall is one of the most celebrated artists currently working in the United States. Marshall, who is a recipient of the MacArthur Foundation “Genius Grant,” has exhibited widely in both this country and around the world. Over the course of almost three decades, Kerry James Marshall has produced a complex body of work exploring the representation of African Americans in society, culture and art history. Marshall explores the experiences of African-Americans and the narratives of American history that have often excluded black people. His large-scale paintings, sculptures, and other objects often deal with the effects of the Civil Rights movement on domestic life, in addition to working with elements of popular culture.

The Greater Des Moines Public Art Foundation, established in 2004, recognizes that art belongs not just in galleries and museums, but in streetscapes, parks, buildings and infrastructures of a thriving community. Dedicated to envisioning, developing, advancing and promoting public art projects, the Public Art Foundation collaborates with local entities and artists to engage, inspire and enrich the lives of residents and visitors to the community. The goal is to increase awareness of our community as a world-class destination for public art. For more information about the Public Art Foundation, visit us here.