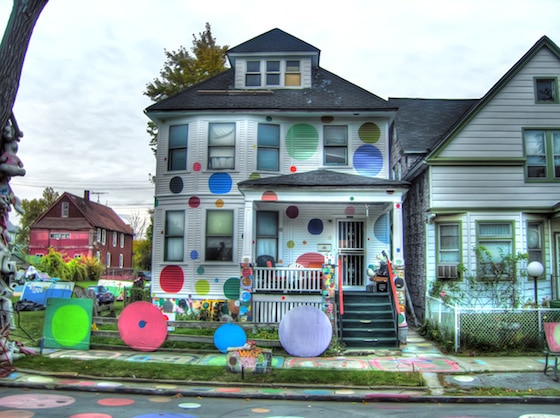 In 1986, the artist Tyree Guyton founded The Heidelberg Project on an abandoned street on Detroit’s East Side. The artist transformed a forgotten corner of the city into a vibrant, whimsical installation using found objects and house paint.

The Heidelberg Project spans two city blocks, with polka-dotted houses and found object installations, with over 250,000 visitors every year. The site, which was demolished twice by the city of Detroit and subsequently rebuilt, is also a non-profit organization that provides arts education to children and public programs for visitors. Through the Heidelberg Project, the artist draws attention to the plight of Detroit’s forgotten neighborhoods, and spurred discussion and action.

Sadly, nine fires have burned through portions of Tyree Guyton’s Heidelberg Project, that most recent one gutting the “Party Animal House” on 7 March 2014.