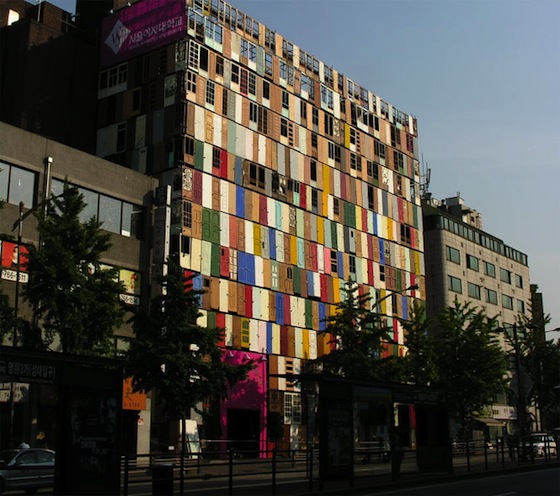 Choi Jeong-Hwa sees everyone as an artist and everything as art, or at least as materials. From his project “1,000 Doors” － a 10-story public installation made of recycled doors － to a ‘great wall’ on a rooftop made of green, plastic buckets.

Recycling and reusing commonly found goods that would otherwise be added to our growing waste facilities are the very fundamental concepts of green architecture. What’s truly inspiring is when those products are maintained as their original self yet used in a new, eye-opening way.

For the recycled public art project titled “千 Doors,” Choi completely plastered the façade of an unremarkable 10-story commercial building with 1,000 salvaged doors. This was a slight departure for an acclaimed artist best known for “elevating dumpster diving to high art.” Normally, Choi works not with repurposed building materials but with found plastic objects and straight-up garbage as evidenced in his 2008 installation “Gather Together.” For this undertaking, he festooned a massive stadium built for the 1988 Summer Olympics, with sparkling strings of trash unceremoniously thrown away by 10 million people.

As you can see from the photos above and below, with the help of a vivid imagination, scaffolding, and some dedicated scavanging, Choi was able to turn the humdrum and the neglected into somewhat quite extraordinary.

In an interview with The Creators Project, Choi explains he “decided against becoming an artist and decided instead to be an ordinary person who thinks like an artist.” Choi’s outlook has led to a diverse output of performances, parties and public installations which shatter the traditional expectations of an artist’s oevre.

The artist’s predictions for art in the digital age paint an inspiring and exciting future.

Choi Jeong-Hwa (born 1961) is a Seoul-based artist who uses a wide spectrum of media in his work. He works across many disciplines – art, graphic design, industrial design and architecture – using a broad range of media including video, moulded plastic, shopping trolleys, real and fake food, lights, wires and kitsch Korean artefacts.

Inspired by the chaotic vibe of local outdoor markets, Choi Jeong-Hwa’s work looks at the attempts by museums to preserve art in a constantly changing and decaying world.

This celebration of a seemingly superficial object honors the beauty of nature, and the need for imagination when living in urban cultures with a diminishing natural aesthetic.

Intangible Attributes of Public Art: Razing Buddha
You Just Dream -- They’ll Figure Out How To Do It!