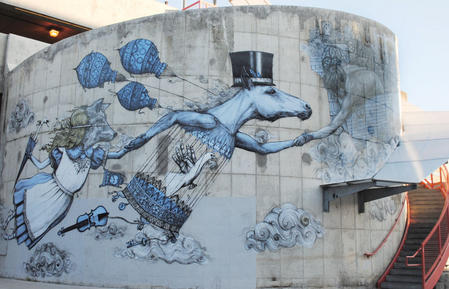 Just read in The Cornell Daily Sun online that the French graffiti artist known as “Roti” has graced concrete walls in the City of Ithaca, New York with three public murals. According to 23-year-old Roti, who operates under secrecy, he is a graffiti artist from a new generation — one with new ideas about how graffiti can be made.

For example, “Meal”, another graffiti artist with whom Roti collaborated for one mural, is a classic graffiti artist who tags using letters and words. Although Meal has the same spirit as the French artist, according to Roti, the graffiti is different, as he uses characters more in his art.

Graffiti in America is different than the graffiti in Europe, Roti said.

“The graffiti writing is really present here, and you find the same in Europe, but there is a new generation making more characters,” he said. “Here there is really beautiful graffiti writing, but you have to know this culture to appreciate it.” For Roti, graffiti is a popular art and requires the use of popular images to be understood by everyone, he said. “It’s possible to paint really complicated pictures, but you need to be understood by everybody,” he said. “What I like in graffiti is everybody can do it.”