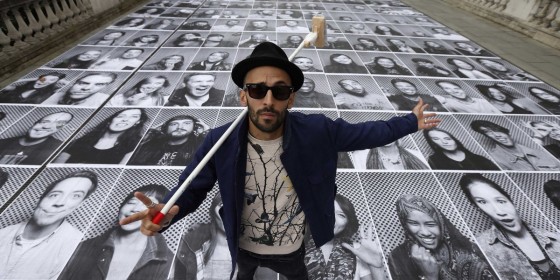 French artist JR (born 22 February 1983) works anonymously, but the giant images he pastes on buildings, streets, and bridges around the world are meant to put faces on often-ignored slices of society, from victims of crime to the elderly.

He has described himself as a “photograffeur”, he flyposts large black-and-white photographic images in public locations in a manner which is similar to the appropriation of the built environment by the graffiti artist. He started out on the streets of Paris. JR’s work often challenges widely held preconceptions and the reductive images propagated by advertising and the media.

JR, who has received a TED Prize for his work, sees the streets as his stage and says he “owns the biggest art gallery in the world.”

Keep scrolling to see four of the artist’s most visually arresting works that are integrated into a specific site.