“Paint, paste, and stencil-wielding creative types who use the urban fabric as their canvas are having a heyday,” recently reported Jordan Kuskins of GIZMODO. “Folks like Shephard Fairey, Bansky, and a whole host of others have had feature films, major gallery shows, and endless internet posts chronicling—and celebrating—their efforts. These still-illicit works often only exist as 2D forms on walls, gracing the sides of buildings, billboards, or any flat space in the concrete jungle.”

After being shown for week at La Friche de la Belle de Mai in Marseille, France, and with support from Backside Gallery (Marseille, France), Mesguich brought his sculpture to the city streets to see how it would interact in an urban environment. 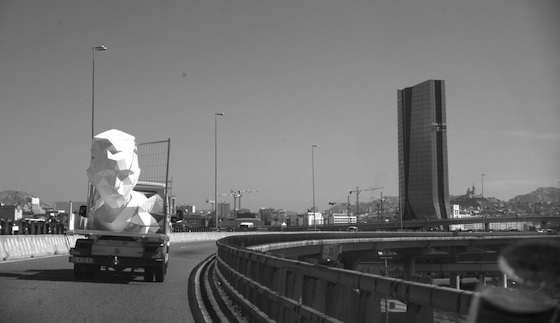