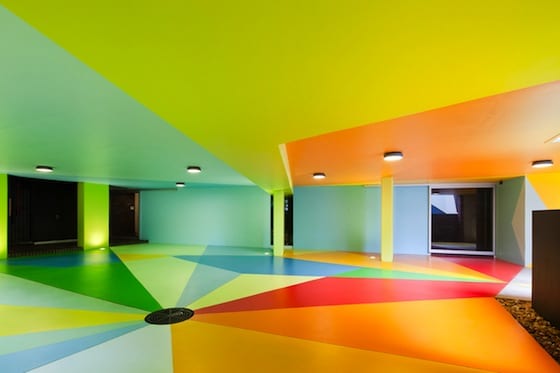 Parking lots are often-overlooked part of our daily routine, seen as a jumping off point for the day or a transitory space. Despite its bland reputation, international art duo Craig Redman and Karl Maier see the parking lot as another opportunity to show their colorful perspective.

Craig and Karl said, “the objective of the project was to breathe new life into the space which, having been rendered in concrete with little inlet of natural light, felt quite dark and heavy.” The eye-popping paint job of “72DP” negates the boundary between wall and floor and instead treats the whole environment as one giant canvas. It resulted into an explosion of colors with geometric shapes making their way out of the driveway.

Craig Redman and Karl Maier live on opposite sides of the world but collaborate daily to create bold work that is filled with simple messages executed in a thoughtful and often humorous way. They specialize in illustration, installation, typography, as well as character, editorial and pattern design.

Craig & Karl have exhibited across the world, most notably at the Musée de la Publicité, Louvre. They have worked on projects for clients like LVMH, Google, Nike, Apple, Vogue, Microsoft, Converse, MTV and The New York Times.