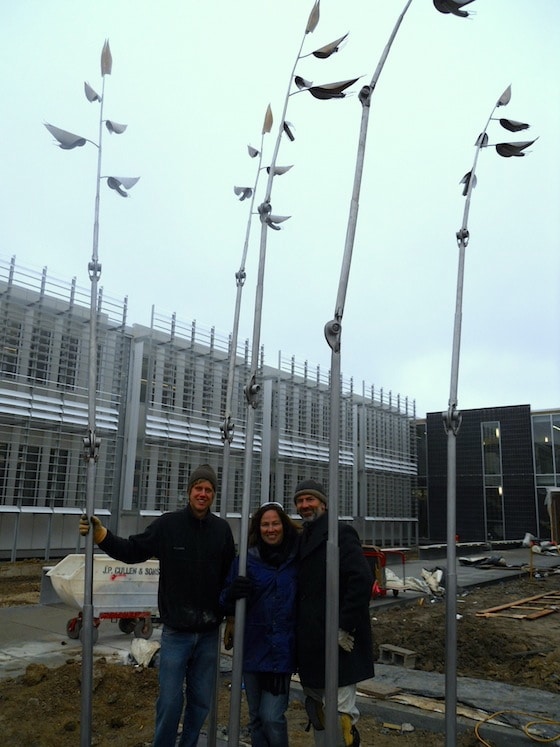 An impressive installation at London’s Barbican Centre, allows visitors to walk straight through a simulated rain storm without getting wet.

Created by Hannes Kock and Florian Ortkrass and Briton Stuart Wood known as the art studio rAndom International, the piece — titled Rain Room — uses a set of 3D cameras to detect people’s positions, turning each of its individual rain streams on or off accordingly. Covering an area of more than 1,000 square feet, it uses almost 220 gallons of water every minute, with the total supply being quickly filtered and re-circulated.

It is a startlingly surreal experience … As visitors step up on to the stage, these identical vertical lines of driving rain begin to be repelled, as if each body is giving off a kind of invisible magnetic field. As you step further in, the rain closes around you, enveloping each silhouetted figure in a perfect cylindrical void.

“We started three years ago, testing temporary ‘printing’ with water, spraying droplets from above, like a long-distance ink-jet printer,” says Florian Ortkrass, who founded rAndom International with fellow Royal College of Art design graduates Stuart Wood and Hannes Koch in 2005.

“But we became much more interested in how people would react to the piece,” he explains. “It’s the same with all of our work: it doesn’t make sense without anyone there.”

Their first piece involving participation was Audience (2008), a disconcerting field of mirrors that eerily turned to follow visitors as they walked between them, making the viewer both the active agent and subject of the piece. Two years later, their Swarm installation translated the collective behavior of a flock of birds into moving light. The sound of visitors stimulated the “collective consciousness” of a network of suspended LEDs, causing dynamic waves of light to ripple through the space.

The group treats each project as part of an ongoing process of research into the relationship between people and new intelligent technologies, and has been working with the cognitive scientist Philip Barnard to analyse people’s behavior.

“The best bit is watching what people do,” says Ortkrass. “It’s either totally crazy, or utterly banal, but never what we’re expecting.” (excerpt from The Guardian)

You can see how it works here in the video.