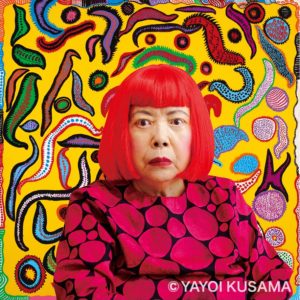 Kusama works primarily in sculpture and installation, but is also active in painting, performance, film, fashion, poetry, fiction, and other arts. Her work is based in conceptual art and shows some attributes of feminism, minimalism, surrealism, Art Brut, pop art, and abstract expressionism, and is infused with autobiographical, psychological, and sexual content. She has been acknowledged as one of the most important living artists to come out of Japan.

Kusama trained at the Kyoto School of Arts and Crafts in a traditional Japanese painting style called nihonga. she was inspired, however, by American Abstract Impressionism. She moved to New York City in 1958 and was a part of the New York avant-garde scene throughout the 1960s, especially in the pop-art movement.[3] Embracing the rise of the hippie counterculture of the late 1960s, she came to public attention when she organized a series of happenings in which naked participants were painted with brightly colored polka dots. Since the 1970s, Kusama has continued to create art, most notably installations in various museums around the world.

Began to create open-air sculptures in 1994. Produced open-air pieces for the Fukuoka Kenko Center, the Fukuoka Municipal Museum of Art, the Bunka-mura on Benesse Island of Naoshima, Kirishima Open-Air Museum and Matsumoto City Museum of Art, , in front of Matsudai Station, Niigata,TGV’s Lille-Europe Station in France, Beverly Gardens Park, Beverly hills, Pyeonghwa Park, Anyang and a mural for the hallway at subway station in Lisbon.  Biographical information is available. 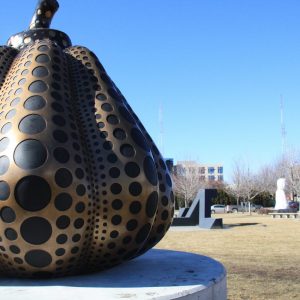