William Tucker is a modernist British sculptor and modern art scholar. He was born to English parents in Cairo, Egypt in 1935. In 1937, his family returned to England, where Tucker was raised. He attended the University of Oxford from 1955-58. He continued his sculpture studies at the Central Saint Martins College of Art and Design in London, where the influential English abstract artist Sir Anthony Caro was teaching. He made his name in the 1960s as one of the younger generation of abstract sculptors associated with Anthony Caro. His “Meru” series was included alongside Caro at the seminal 1966 exhibit of minimal art, “Primary Structures,” at the Jewish Museum in New York. (Tucker’s “Meru” series is a group of pieces based on an identical overall structure, a kind of stepped bridge; the internal measurements of which remained constant through the series.)

Tucker spent two years (1968–70) as a Gregory Fellow at the Fine Arts Department of the University of Leeds and represented Britain at the 1972 Venice Biennale (a major contemporary art exhibition that takes place once every two years in Venice, Italy). In 1974, Tucker published “The Language of Sculpture,” a history of early modernist sculpture, which summed up this phase of his career. It led (the international authority on the history of modern sculpture) Albert Elsen to call him a “spokesman for an academic abstract art.” He emigrated to North America in 1976 and wound up on a farm in upstate New York. Soon after, he abandoned constructed abstract sculpture, and started to model in plaster semi-figurative forms with rough surfaces, which were then cast in bronze. He has continued to work in this vein ever since.

He moved to New York in 1978 and taught at Columbia University and at the New York School of Drawing, Painting and Sculpture. He received the Guggenheim Fellowship for Sculpture in 1981 and the National Endowment for the Arts fellowship in 1986. Tucker became an American citizen in 1985. In 1993 he was appointed co-chairman of the Art Program at Bard College. In 2010, Tucker was a recipient of the International Sculpture Center’s Lifetime Achievement in Contemporary Sculpture Award. 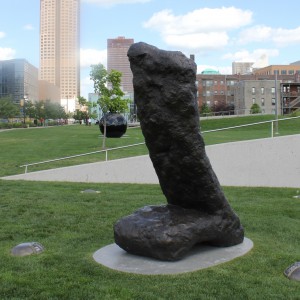